White balance is a subjective decision, and I would suggest not letting the digital camera make that decision for you—thus, it’s best to avoid AWB, or the automatic white balance setting on your digital camera. In AWB, the scene is analyzed during the exposure and calculations are made by the digital camera’s software in less than a fraction of a second. As a result, you could literally place your camera on a tripod, set it to high motor-drive mode, and squeeze off a dozen frames—only to find that some of the frames are not identically white balanced. 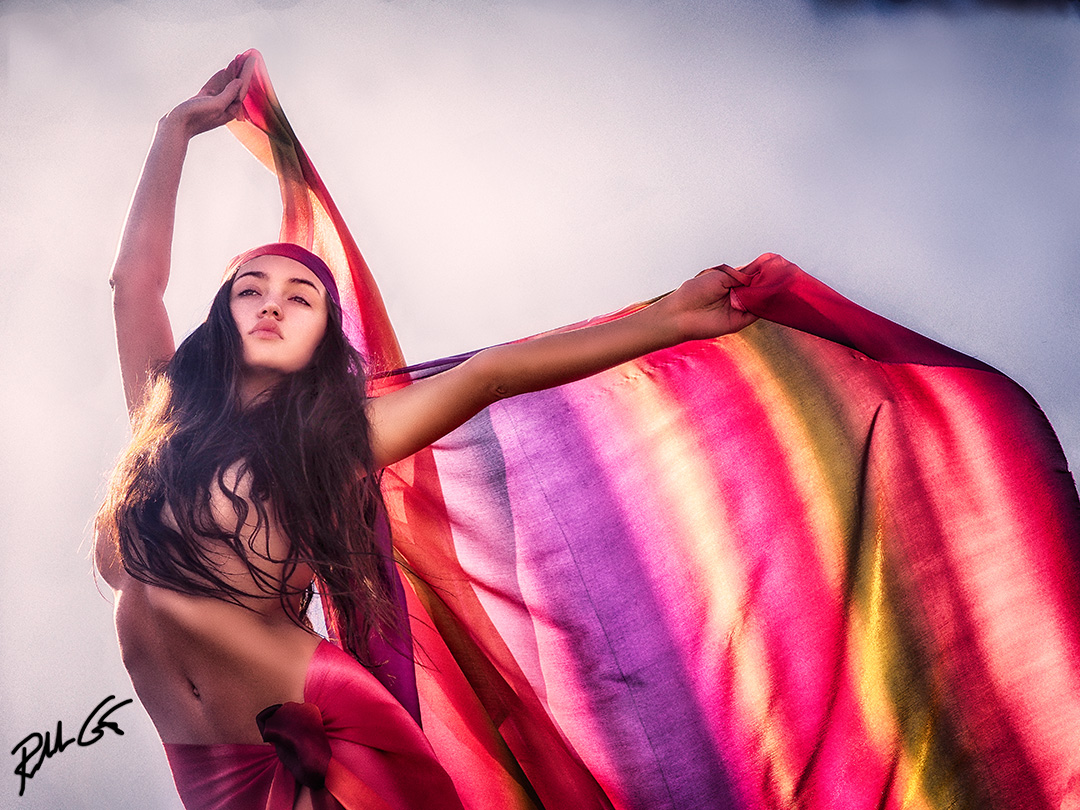 This photo of Dilara was captured at 6000K and her main light was sunlight bounced off a SUNBOUNCE MINI fitted with a 3D RAINDROPS SILVER fabric screen.

This happens because the end result is based on digital camera manufacturer proprietary software. This software interprets, or interpolates the light captured as it sees it in that split-second. While this interpolation is usually very good, one problem is that the auto setting can actually neutralize color casts that you want in your photos, such as the sweet, warm qualities of the golden hour light.

This is why I normally shoot all my photographs, except maybe the kid’s birthday party photos, in manual white balance mode. The idea is to tell the digital camera the number of the color temperature in Kelvin and not let the digital camera tell me what it thinks is best. A camera is made to capture what I create, not to create and capture what it thinks logically is best.

Kelvin temperature of light will fluctuate based on many conditions. Some conditions include the actual location of the shoot in longitude and latitude, pollution, atmospheric conditions, time of day, time of year, angle of light, etc., when it comes to natural light. In the case of artificial light, age of a bulb, voltage fluctuations, and various brands of lamps alone will cause the color temperature output to vary.

On a normal basis, my digital camera white balance is set manually at 6000K, or 6000 Kelvin. Kelvin is how we measure color temperature of light, and for most photographers, the only real Kelvin numbers we need to remember are 3200K for tungsten or incandescent light sources; 5000K to 6000K which represents most daylight situations during the middle of the day, and 5400K which is the temperature most top of the line studio flash units produce on average.

By ensuring that your digital camera will introduce this extra warmth in your photographs, you’re basically emulating the days of saturated-warm slide film—films like the now discontinued Kodak E100SW professional film. Using this manual white balance setting on your digital camera makes your digital camera think that the light is a cool-colored light source. In an attempt to neutralize this, the digital camera’s white balance software will add the complimentary colors of yellow and reds. If you’re actually shooting under neutral lighting, this results in a warmer overall photo. This works great for models or female subjects especially for darker-skinned models and it’s especially effective for fair complexions too.

Let’s imagine, however, that your model’s skin is a bit ruddy.  In that situation, you might move your manual white balance on your digital camera setting toward 5500K. With ruddy skin, you don’t want any more reds, and setting the white balance closer to the more neutral flash or daylight setting will accomplish this as the digital camera will not add warmth. This same principal works when shooting with light sources that are not daylight balanced. Starting with the actual color temperature of the light you are shooting under, choose a slightly higher color temperature value to warm your subject’s skin tones, or select a slightly lower setting to cool them down a bit.

The scale below provides my personal interpretation of warm to cool, with neutral being normal, noon-to-3 p.m. daylight.  For example, look at “Light Overcast Day” on the chart. You’ll notice the color temperature is approximately 5800-6000K, or “Cool +1.”  This means that the light is one “unit of color” cooler than neutral, which is clear, colorless, boring light.

In the days of making color prints in the darkroom, we often referred to color correction of photos in units of color, such as +1, +2 or -1, -2 of cyan, magenta or yellow—or the exact opposites: red, green or blue. With this in mind, a Light Overcast Day is +1 cool which is almost like +1 cyan, a blue-green color. When you set your camera at 6000K white balance, as I often do, it’s the same as telling your camera the light is +1 cyan, so the camera adds the opposite. Again, the camera thinks it’s doing what it’s programmed to do, bring a known white, back to that standard white, but in reality, it’s tricked into warming the entire image.

Rolando Gomez is a professional photographer and author of five photography books that has traveled to 45 countries for assignments. The former soldier and U.S. Army combat photographer has taught hundreds of photography workshops for almost two decades. A 2016, 2017 and 2018 Top Writer for Quora, his partial credits include Newsweek, Parade, Playboy, Rangefinder, Maxim, Rangefinder, New York Times, Stars & Stripes, and various other publications. You can find more of his work on AmericanoDream.com.
(Visited 537 times, 1 visits today)