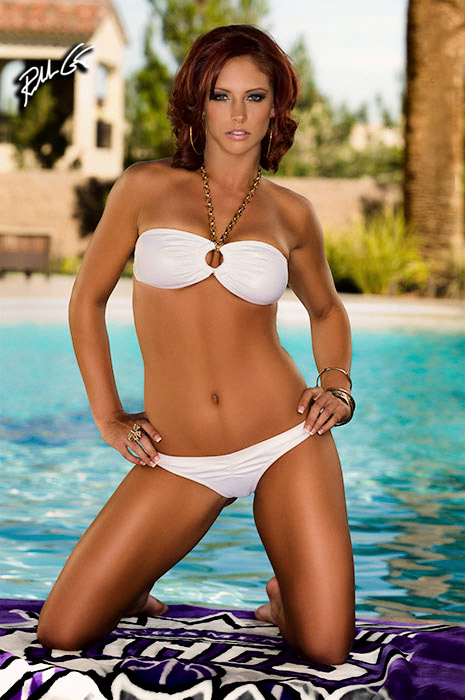 One of the photos during the Sacramento Kings Dance Team calendar shoot where I used a SUNBOUNCE BLACK reflector to control the details in the swimsuit.

This switch in terminology when it comes to labeling a black reflector is because of its absorption, or subtraction of light. The reason this photography reflector is so unique is because it helps a photographer by adding light while also subtracting light. The black material is reflecting black-toned light back onto the subject, which is a technique I like to use in my photography, especially when working with a model with blonde hair or light-colored clothing outfits on the model itself. Black can also tone down any highlights or hot spots on the set.

Think of it like the “v-flats” used in a studio, basically two, 4-foot by 8-foot foam core boards gaffer taped on their longest sides to form a “V” when standing tall. These are great tools for a photographer working with high-key elements, such as a wedding photographer photographing a bride in a white wedding dress. The photographer would place a v-flat on each side of the bride as close to her as possible while keeping the v-flats out of the camera frame. The black side of the v-flat is used, not the white side.

This technique is also possible with four SUNBOUNCE PRO, BLACK fabric reflectors. While obviously v-flats are less expensive than four reflectors, the point was to illustrate how the technique works — but on location, say a beach, it’s impracticable to carry two v-flats (four, 4-foot by 8-foot, thin foam core boards), especially if it’s windy, thus this is where a professional photographer would use SUNBOUNCE PRO BLACK reflector or even the SUNBOUNCE SUN CAGE. The v-flat studio technique is also possible with just two portable reflectors, one on each side of your subject, though four make it a replication of the v-flat studio system.

In fact, for a little variety, the photographer can place a silver, zebra, or white reflector more behind the subject while using the black reflector in the front of the subject. Thus, this would create subtraction from say that same bridal gown, while allowing for backlighting accents on the bride. The photographer can still reflect a main light onto their subject, either with another reflector like a silver or zebra reflector, or even with a portable flash.

This is a unique balance of light, subtracting light from the highlights and in the case of the white dress, also reflecting back in some middle tones from the black reflector, while adding a “punch” to the bride’s skin tone and even the eyes from the lighter reflectors. 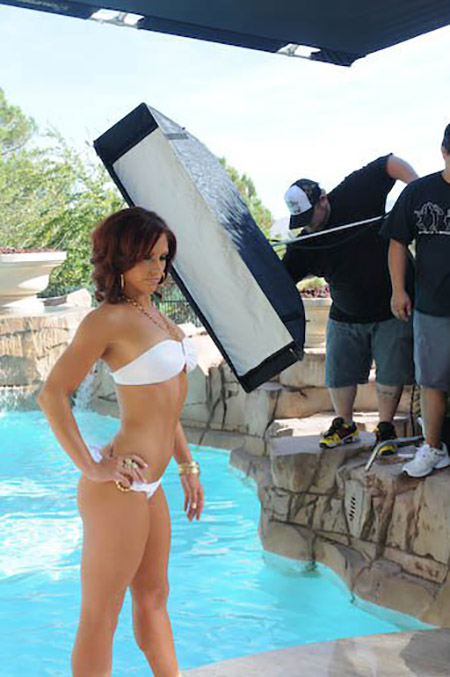 In this shoot, due to limitations around the pool, we used a black reflector above the model to “cut” the light while adding some black-tones back into the white swimsuit.

Black reflectors also work great with blonde haired subjects, as photographers will expose for the subject’s skin tone, usually darker than blonde hair. By using a black reflector, like the SUNBOUNCE MINI or MICRO near the hair of your subject, the photographer will capture a more balanced overall exposure ensuring that hair will not have blown out highlights.

These techniques reference the 90-percent rule, which states that pure black will absorb 90-percent of the light that strikes it while pure white will reflect 90-percent of the light that strikes it.  When you keep this rule in mind, anything toward the white-side of the scale reflects more light, than anything toward the middle or black tones.  Thus, blonde hair, especially platinum blonde hair, will always reflect more light than normal skin tones — the human eye corrects this and balances it out but digital cameras in photography do not, they reproduce the hair brighter, or slightly overexposed than the skin.

Again, if on location, especially outdoors, v-flats or black foam core boards are impractical with their inability to collapse for portability during transport, and their ability to collapse with wind during the shoot.  The SUNBOUNCE reflector lighting system is made of collapsible frames designed as lightweight and portable, made of strong aluminum plus their cross bars are designed to attach a GRIP-HEAD that secures the frame to a sandbagged light stand.

If I attach the grip head to an arm mounted on a C-stand, then there is even more flexibility to maneuver the black reflectors around the top of the model, closer to her hair.  The concept here is to place the panels just slightly above the camera frame, thus adding 10-percent black.

While many professional photographers will call black panels of various materials flags, or cutters, I like to think of them as reflectors that can also add or subtract light when needed, so it’s not unusual to find a silver, white, zebra and black fabrics in my lighting gear bag for my SUNBOUNCE photography reflectors.

Rolando Gomez is a professional photographer and author of five photography books that has traveled to 45 countries for assignments. The former soldier and U.S. Army combat photographer has taught hundreds of photography workshops for almost two decades. A 2016 and 2017 Top Writer for Quora, his partial credits include Newsweek, Parade, Playboy, Rangefinder, Maxim, Rangefinder, New York Times, Stars & Stripes, and various other publications. You can find more of his work on AmericanoDream.com.
(Visited 576 times, 1 visits today)