Most agency-signed fashion models are at least five-foot-eight in height though the majority are even taller, and many glamour models are usually much shorter. It’s not that a glamour model couldn’t pull off fashion, it’s just that the major fashion model agencies prefer models closer to five-foot-ten. And while the model agency attitude of tall models might irritate a shorter model, you as a photographer can always make a short model look and appear much taller. 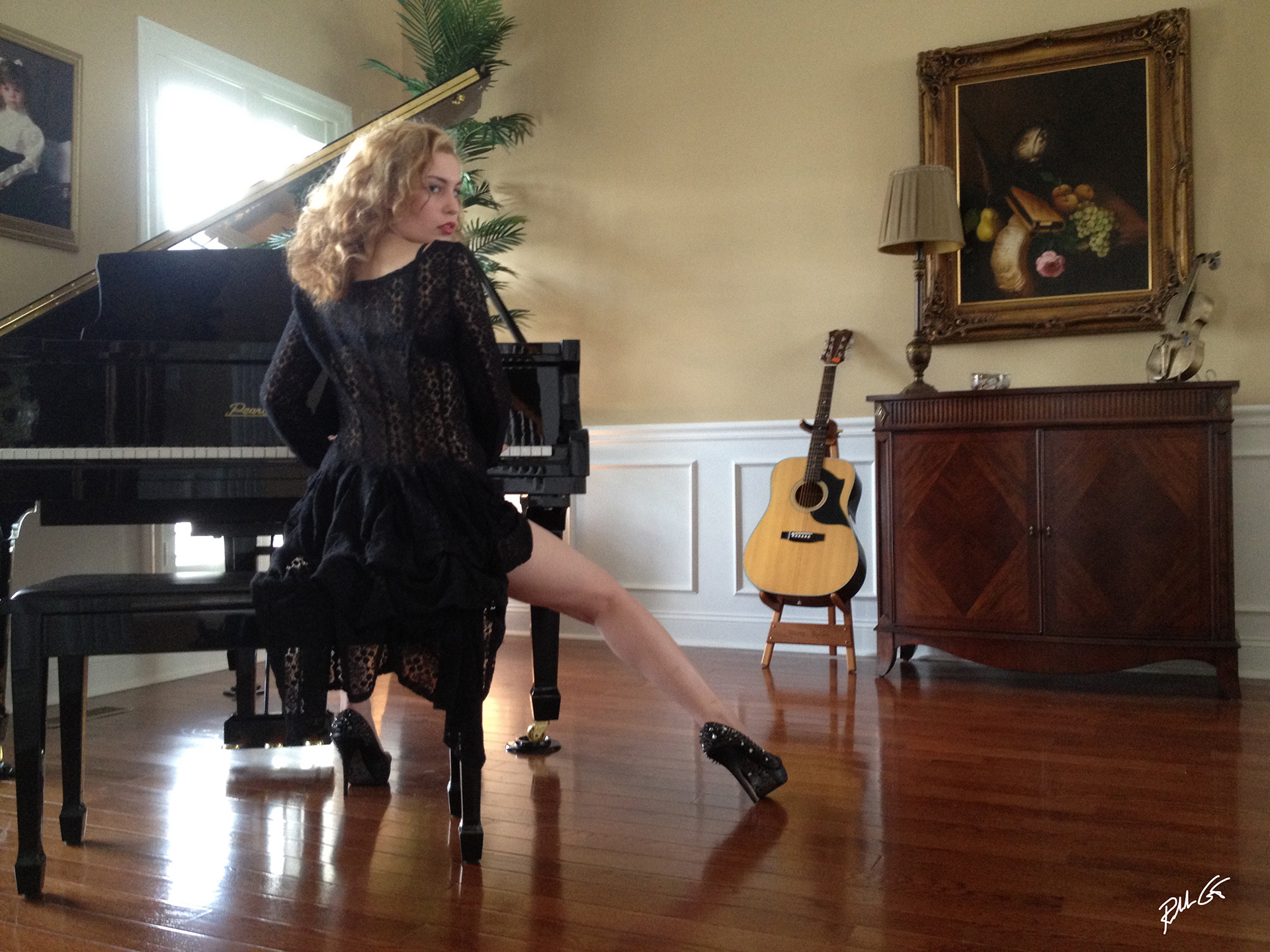 In this pose, the model’s extended leg helps elongate her body and make her appear taller.

The rule is simple, in order to make a short model taller, you as the photographer must shoot from a low angle and back in the old days of shooting for Playboy, their rule of thumb was that the camera lens should not be higher than the person’s belly button level. Basically, it’s all about lens perspective. When a photographer shoots down on a model, the model becomes shorter and heavier and when a photographer shoots form a low angle up, the model becomes taller and slender. 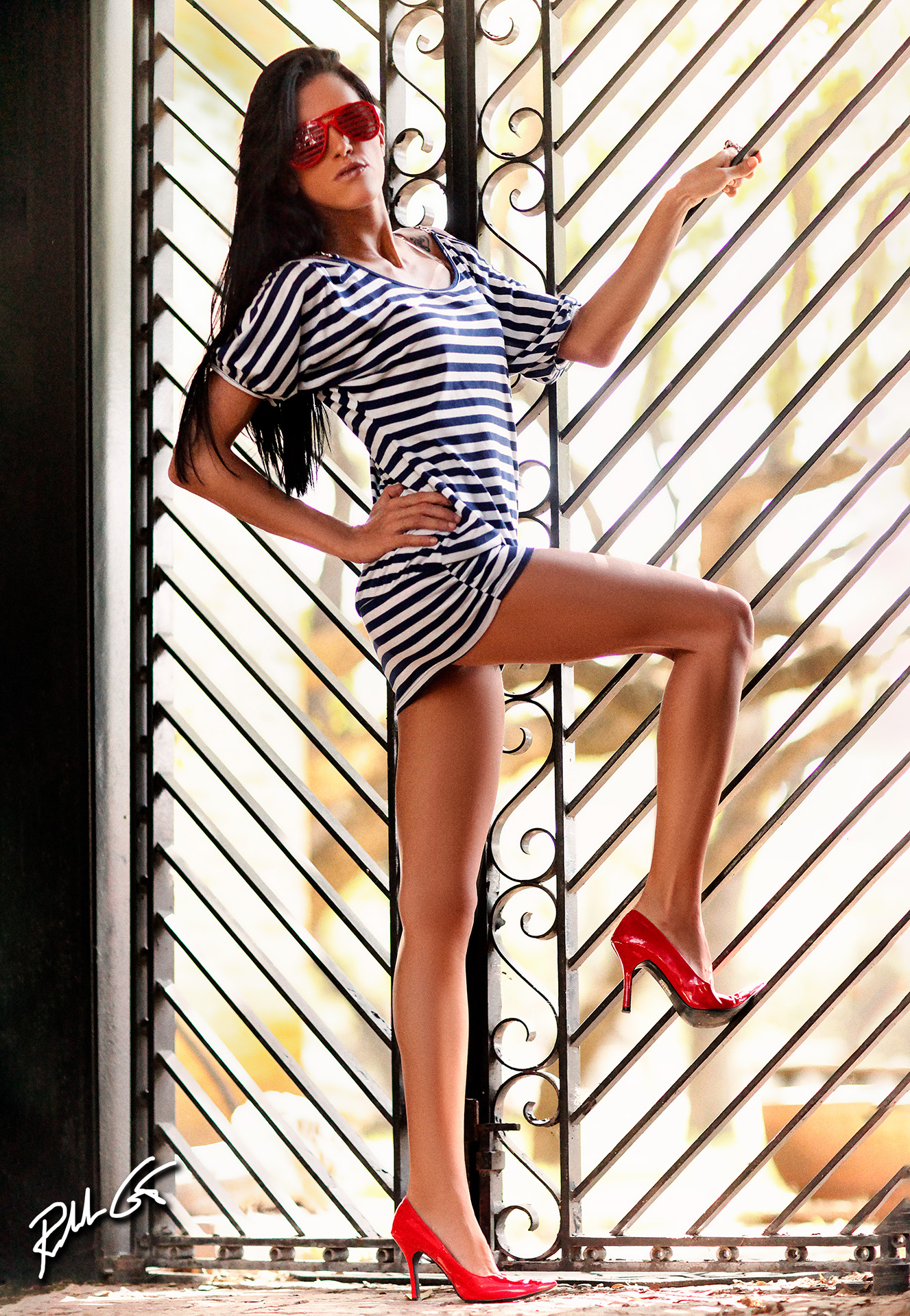 Candice is actually five-foot-six inches tall, but here, a short dress and heels plus a low shooting angle makes her appear taller.

It’s an easy photographic technique to do but you’d be surprised how many photographers fail at this simple fundamental in photography. Personally, I’ve seen this failure from photographers that work with models simply because the photographer was just plain lazy to kneel down or even lay on the floor and shoot up. Obviously shorter photographers have a built-in advantage.

The legs in general are more appealing in most glamour and nude applications when they appear longer and thinner.  With shorter subjects we simply shoot from a lower-angle and upwards toward the subject, being careful not to emphasize the nostrils.  A bit of butterfly, or Paramount lighting, creates shadows under the nose and helps subdue the nostrils.

Lens selection is important too. For heavier subjects, avoid lenses shorter than 85mm, especially a 50mm, as they tend to naturally add weight to the subject.  My favorite by far in this situation are the actual prime lenses like an 85mmor even longer focal lengths.  Back to the days shooting at Playboy, their standard was once nothing less than 150mm on a full-frame 35mm DSLR.

Now while it’s no secret wide-angle lenses from a low shooting angle can practically make anyone look like a giant, when it comes to glamour or even fashion photography, the rule still applies, shoot belly-button level or lower. This tall and often giant effect on your subject’s legs when captured with wide-angle lenses is caused by distortion and not all distortion flatters your model, something to keep in mind.

On posing, have the model extend her body and avoid slouching poses. Other ideal poses are the model lying on the bed, facing the camera, resting on her elbows and her body turned at a more dramatic angle where when shooting a horizontal of this pose her feet go toward the upper corner of the frame and her arms at the opposite lower end of the frame, forming a nice imaginary diagonal line.

If you’re model stands in her pose, have her wear heels which help lengthen the legs and shorter garments that reveal more of the legs because these techniques give the perception of long legs too. The more of the legs that are visible, the longer they’ll look simply from the perception of the human mind. It’s often said perceptions are everything, so another thing to consider when it comes to perceptions, pay attention to your background. Avoid backgrounds where anyone that viewed the final photo could relate a model’s height to the background. 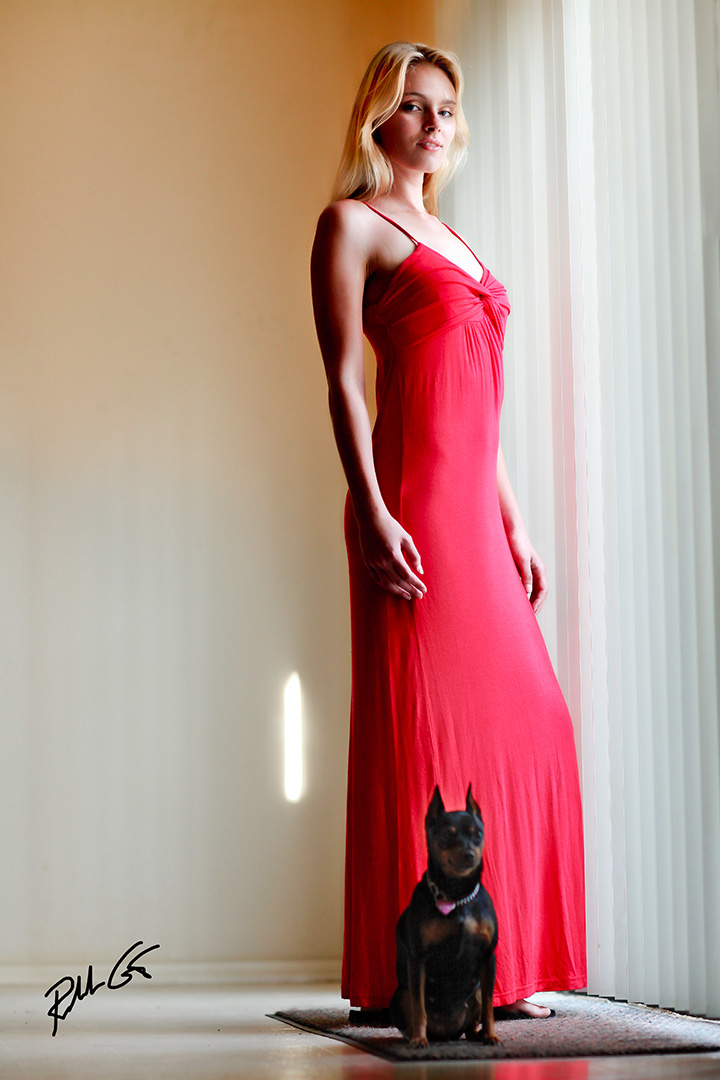 In this image, this five-foot-seven inch tall model appears taller with the dog used for scale, and the low shooting angle.

For example, when a model stands next to a car, especially a shorter model, it’s a must to shoot from a low angle as cars average between five-foot for most cars and six-foot in height for SUV’s and trucks. Similarly, don’t pose a short model next to a garage door as their average height is from seven to eight feet. The same goes with interior home doors that on average are six-foot eight-inches tall. The idea is not to give the viewer anything in the background or next to the model that can indicate her height through the perception of scale.

The same goes if your model will pose next to average height people, she’ll just look average height. Hollywood knows this well and that’s you rarely see Tom Cruise, who’s only five-foot-seven inches tall next to tall people. So, when you place a shorter person next to your short subject, the perception again is that your main subject is tall as she’s obviously taller than the person next to her.

This is a common trick used in movies and TV shows, if a main actor is tall, the casting director will cast people that are smaller than the main actor and if the actor is short, they avoid casting taller people next to the main actor. Another trick is in post-production as is in the movie Lord of the Ringswhere according to Wikipedia, “The human-sized characters (Gandalf, Aragorn, Boromir, Legolas) were filmed in a second take, and the two shots were composited at different scale to make one image, making the initial Dwarf/Hobbit character shot seem smaller.”

In summary, maintain a camera angle lower than the subject’s belly button and use the proper lens based on the result you want to achieve. Also take into consideration the scale relative to size of other people or objects next or around your model. Most models aren’t agency-signed fashion models, especially when it comes to glamour photography, but if you follow the above techniques as a photographer, most viewers of your images will never know you made a shorter model look taller.

Rolando Gomez is a professional photographer and author of five photography books that has traveled to 45 countries for assignments. The former soldier and U.S. Army combat photographer has taught hundreds of photography workshops for almost two decades. A 2016, 2017 and 2018 Top Writer for Quora, his partial credits include Newsweek, Parade, Playboy, Rangefinder, Maxim, Rangefinder, New York Times, Stars & Stripes, and various other publications.
(Visited 1,157 times, 1 visits today)