One of the world’s greatest hockey players, Wayne Gretzky said, “You miss 100% of the shots you don’t take” and that famous quote applies to sports photography too. Here’s are 15 sports photography tips you can use from my years of experience photographing everything from Little League baseball games to almost six years as an NBA credentialed photographer. 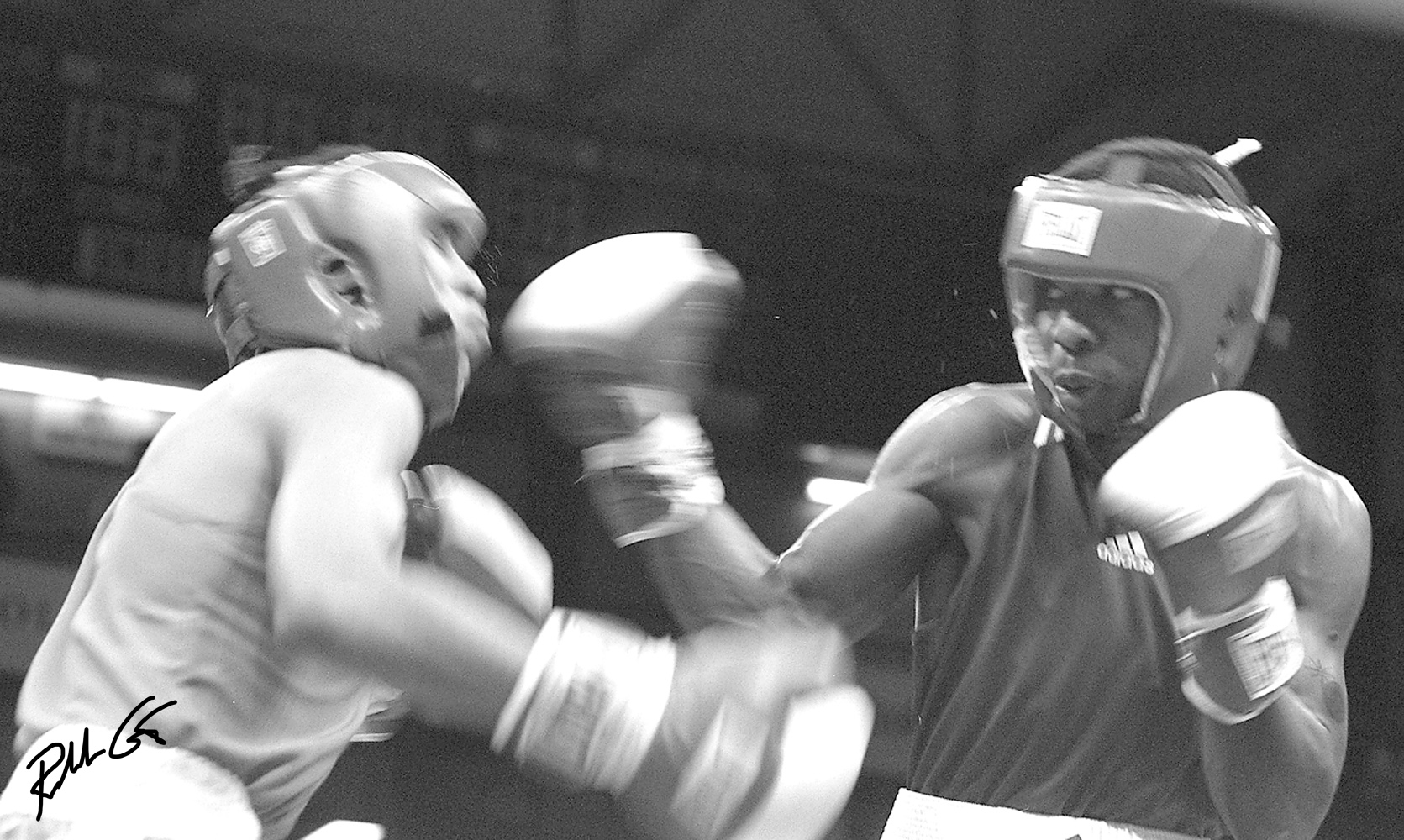 Access is everything as explained in my 15 sports photography tips. I captured this photo at the Pan American Olympic Games and it took me almost a year to get credentials to photograph the games.

1. First rule of sports photography, don’t get caught up in the game. At the end of the game there will be losers and winners — it doesn’t matter if your team wins or not, what matters is that you get powerful photos and when you start to pay attention to the score, the fouls, the strike count, or the yardage, you’ll miss the most valuable shots.

2. The best sports photographers, and for that matter photojournalists of every genre know, that some of the best shots are captured before or after the game, not just during the game. Arrive early to the game and leave late after the game, seriously, you’ll get better parking and when it’s time to leave, the traffic will be practically gone.

3. The advantage when you arrive early and leave late is you can network with referees, coaches, players and even the water boy. This is important for several reasons to include if you get in a pickle, chances are they might come to your rescue and other times, when you need that favorable camera spot, they’re more apt to help you achieve that if they know you — call it the buddy system. 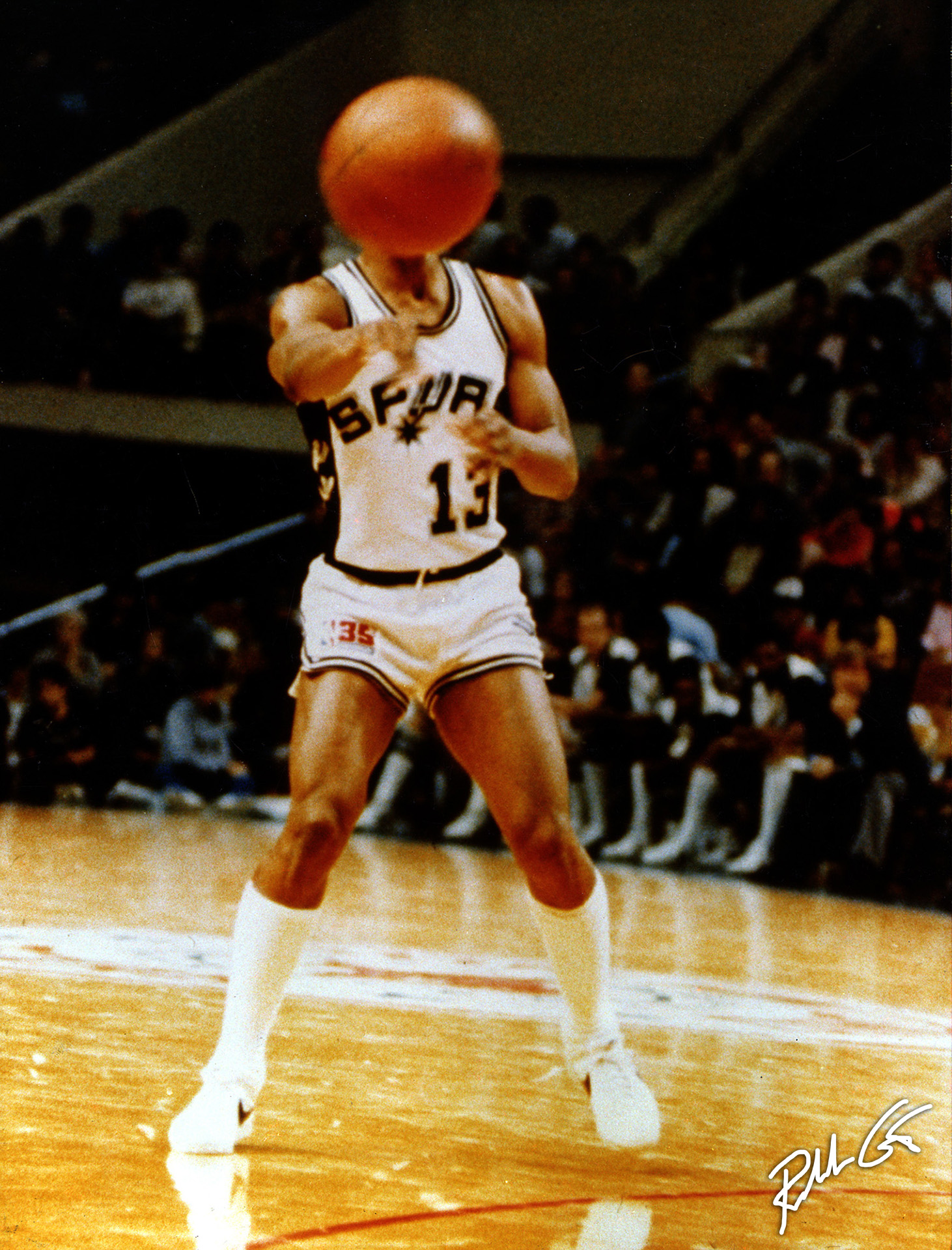 I captured this image almost 40-years ago when you could literally walk up to the baseline and take photos, not today!

Nurture this rapport and network with the team by bringing a few of your greatest photos along with some behind the scene shots and give them to the team — people love photos of their work when it comes to sports. Note: In the NBA, you have to coordinate with the team’s Media Director or you will lose your credentials.

4. Access is everything, so before the season starts, research how to secure that access. Credentials are everything in pro sports, but getting them requires research and usually a media outlet to sponsor you.

5. Know the rules, coaches don’t like their players bothered before the game or after the game. If it’s a professional sports team, you have to coordinate in advance with the media director to speak to any player. In professional sports you are not allowed to ask for autographs much less selfies with the team. Even in the minor leagues, treat all players, personnel and staff with dignity and respect, this goes a long way for that access.

6. When the playoffs begin, most sports venues reduce the total of local photographers and videographers allowed to cover the game. Part of this is to make way for foreign press and the visiting team’s press plus larger media outlets with world coverage. Professional sports is a multi-billion-dollar business and those that get the best shooting venues, or access, are those with bigger media organizations — it’s about the eyeballs, both on and off the court.

If you shoot for the Associated Press, Reuters or Sports Illustrated, you’re pretty much guaranteed a great shooting spot. If you shoot for the local weekly you might be allowed to shoot the regular season games, but the playoff games are different, and chances are, you might consider tickets and just enjoy the game.

7. Be prepared, the possibility to get tackled in a game exists. It’s not uncommon for sports photographers to get smacked, hit, run over, or stepped on. Sports is a rough game at times and not just for the fans or players, anyone near the action can become part of the action real fast. Always be aware of your surroundings, the last thing you want to be known for is if a star player gets injured because you were in the way.

8. Shooting digital in sports photography is a must today. Whether it’s for deadlines for publication or just soccer Mom’s wanting their pictures now, we’re in a world of convenience and speed — nobody wants to wait. Always bring spare digital capture cards, batteries and pack a spare camera body and lens. If your equipment doesn’t fail, as Murphy will eventually come around, then the chances of equipment damage exists, especially if you get pulverized in the heat of the moment. Bear in mind, some professional sports venues, like the NBA, do not allow camera bags on the floor.

9. With digital photography comes white balance. This is another reason to get to a game very early. Just pick a player during warm-ups as usually one team wears white, and there is your walking white balance card. You can also ask a water boy to hold a white towel for you to set your camera’s white balance.

In indoor sports photography, manual white balance works well as the light rarely changes. Not to mention, some sports venues don’t allow flash, so you’ll increase your ISO from ISO 400 to ISO 1600 — for most NBA arenas ISO 1250 works best. 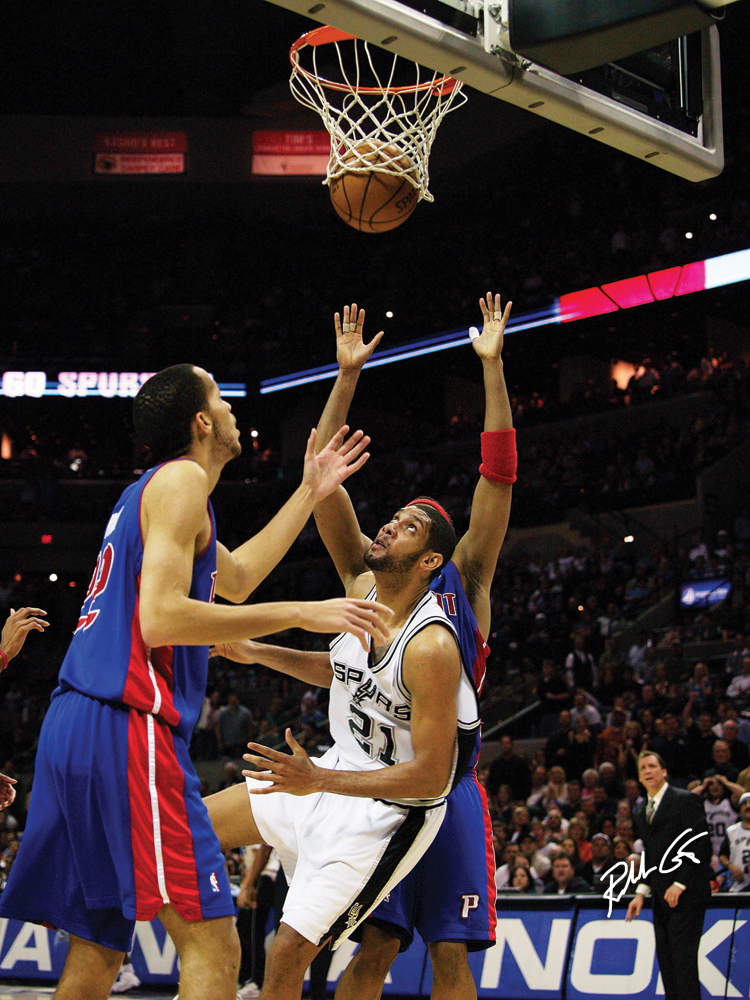 For shots like this, when you prefocus, in this case the basket, it’s easy to capture and tell the story.

When you don’t use flash, especially at professional sports games, you’re usually at the mercy of the lights used for television, or television light grids. Just walk up to any videographer and ask them what Kelvin their white balance is set at, then set your camera accordingly. If it’s a local home game, get there early and take shots of the warm-ups and chimp till you get it right.

10. As crazy as this may sound, make sure and go to the bathroom before the game! Worse thing that can happen is at a dramatic part of the game is you get a call from nature.

11. Eat before the game — eat after the game. Don’t go in with the attitude I’ll get something at half-time. Remember, some of the best shots are before or after the game but sometimes during those rest periods and “time-outs” too. You can sometimes get some funny shots if not an interesting photo no one else will have because you were there.

12. Bring the right lenses. Rarely will you go wrong with a 70-200mm F/2.8 lens. It’s one of the most common lenses today for sports photography, especially image-stabilized lenses. This lens works just as good at a high-school football game as it does at an NBA or NFL game. Now depending on the sporting event, you should also carry a wide to medium-telephoto zoom lens and in some cases, a long, prime telephone lens too. The most common is a fast 300mm telephone lens. The wider the minimum aperture, the better plus it makes it easy to focus your camera in low-light conditions.

13. Program your camera to use the “back button” for focusing and disable the shutter release for focusing, you’ll find this works best. Another focusing tip, learn to pre-focus. Most players have their shooting spots in basketball, so pre-focus on the floor. If the player comes in for a dunk, focus on the net and wait for them to arrive — the same goes for baseball, focus on home plate or whatever base a runner will arrive at.

14. Learn to anticipate the action, the plays, the reactions of the game and players. Like people, a team and its roster all have personalities. Study them. Study their character. Study their methods. Study their techniques. Study their style. Yep, that’s what scouts do, they study, study and when you know your team it will help you predict when the best shots will happen.

15. Don’t play with panning and zooming special techniques until you know you’ve got your shots in the can. It’s like a commercial shoot, get what the art director wants first, then play around for some interesting portfolio shots. Always shoot with a publication mindset.

Rolando Gomez is a professional photographer and author of five photography books that has traveled to 45 countries for assignments. The former soldier and U.S. Army combat photographer has taught hundreds of photography workshops for almost two decades. A 2016, 2017 and 2018 Top Writer for Quora, his partial credits include Newsweek, Parade, Playboy, Rangefinder, Maxim, Rangefinder, New York Times, Stars & Stripes, and various other publications.
(Visited 185 times, 1 visits today)