Improve Your Photography, Get It Straight

There are many things to consider when it comes to the elements of composition that make for a great photo, but one often overlooked element is the natural horizon and in manmade forms, horizontal lines. The popular belief amongst many photo editors is that we wake up looking at the horizon at some point and throughout the day until the sun sets. 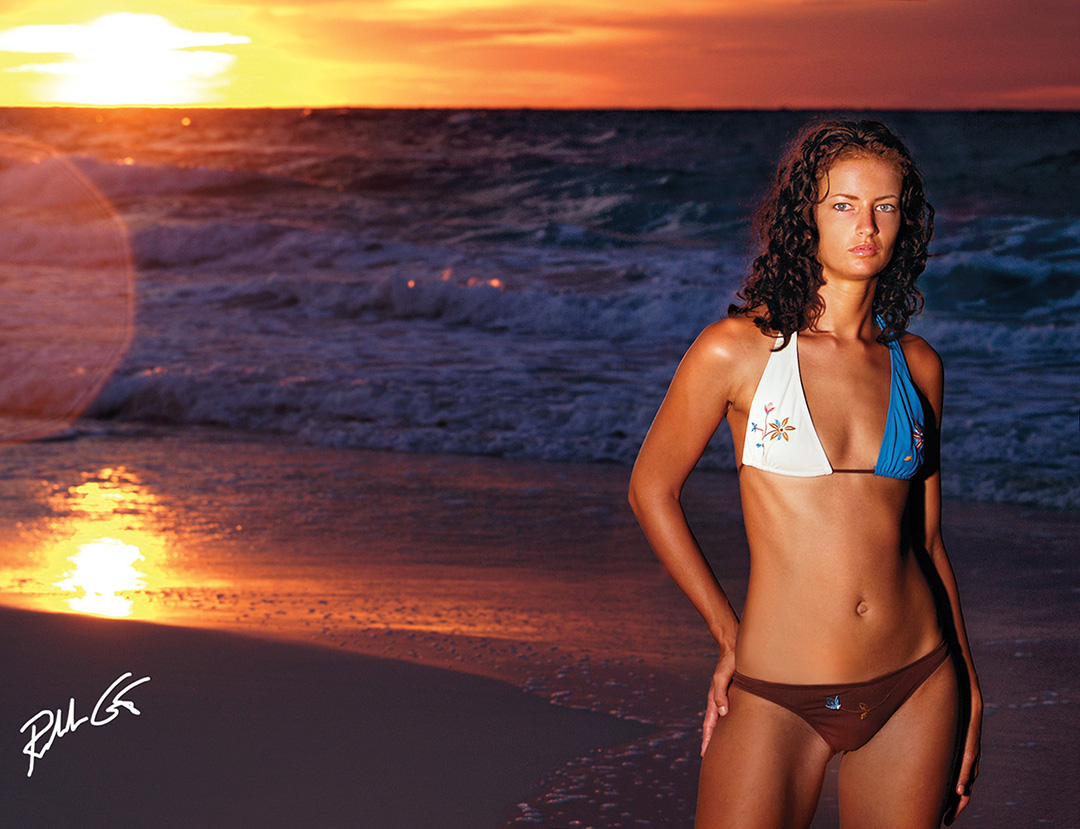 Our brains are traditionally programmed to the horizontal perspective as every day the sun rises from the horizon and sets in the horizon and because of that, this photo could pass as a sunrise or sunset photo.

This repetitive perspective, especially since our human view through our eyes is horizontal and things like a television or computer monitor are traditionally horizontal too, horizontal basically becomes boring. This is one reason, besides shelf-space, that magazines and books tend to take on a more powerful vertical perspective—vertical is not only phallic, but not the norm for things around us in our daily lives.

Think of geometric shapes that surround us, a loaf of bread, a car, a couch, the television set, even calendars meant to view over a long period of time and our world is filled with horizontal rectangles all around us. We’re just used to the predominance of horizontal in our everyday life, perhaps this is why photographers often overlook the importance of horizontal placements in their photos and why most non-professional photographers tend to shoot more horizontals than verticals.

One thing to keep in mind when including horizontal lines or a horizon in a photo, whether you chose to place that line in the center, lower or upper third, keep that line straight, unless your boat is sinking! Photo editors hate crooked lines that normally are perceived straight.

First, let’s look at the least preferred method of placing a horizon—in the dead center of an image, regardless if the image is captured horizontally or vertically. While this is a general composition rule that can easily and effectively be broken, learn it before you try to break it because normally it will slice an image in half. This is further reinforced, and quite frankly boring, if the horizon, or the horizontal line caused by the horizon, is unbroken—or the line goes from edge to edge of the image frame without interruption. 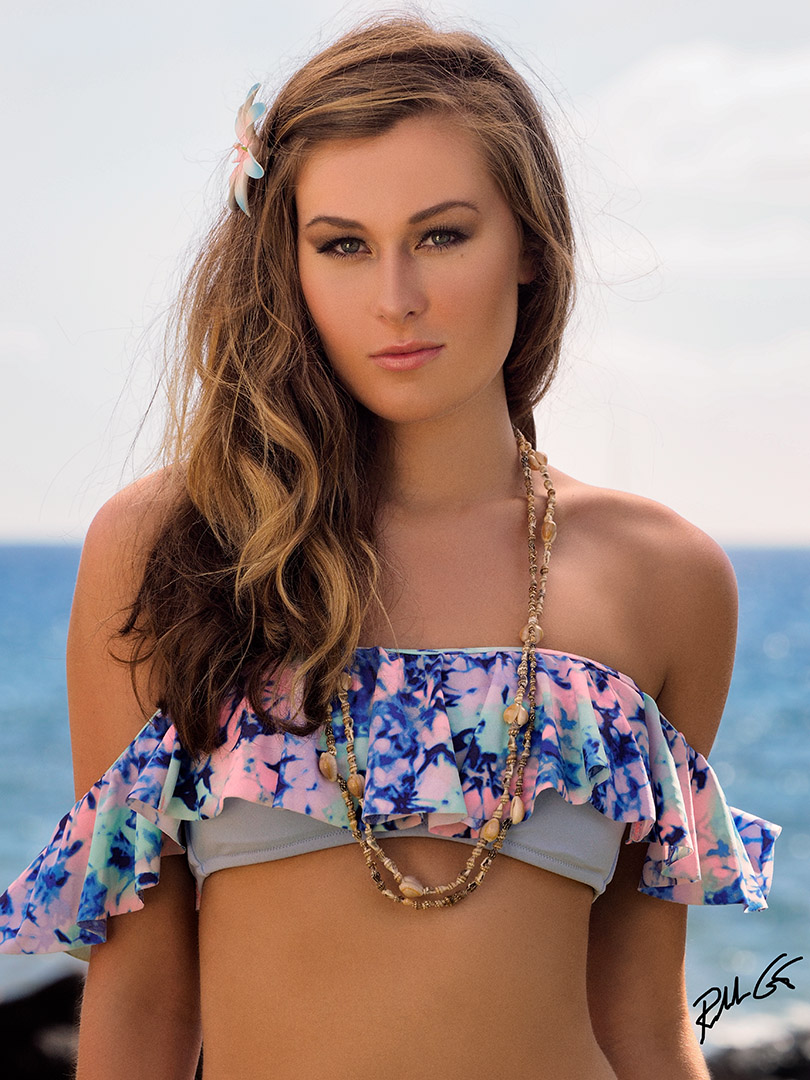 Rebecca stands under a SUN-SWATTER and is illuminated with a SUNBOUNCE MINI fitted with the SPARKLING SUN fabric. Notice the horizon line is just below the top of her shoulders.

Breaking a horizontal line is easily achieved with vertical lines, other shapes or objects in the scene, or even placing a person in the scene. When photographing a person included with a horizon background, it’s considered poor composition if the horizontal line formed by the horizon cuts through your subject’s eyes or beheads them at the shoulders. The solution to avoid this is easy, lower or raise your camera lens to change the perspective or your field of view. Change lenses as this can also help and medium telephoto or telephoto lenses will actually compress and magnify your background.

There is one great use for a centered horizon in a photo, a photo filled with a reflection, thus the scene and the reflected scene create an appealing balance in our image. They are the rule-breaker images that work. This mirror effect is always great for landscapes especially in an area like Lake Louise in Alberta where often the still waters provide for a beautiful mirrored effect.

In general, you avoid placing your horizon in the center by following the Rule of Thirds, thus placing your horizon either at the upper third of the frame or the lower third. The lower third placement is great if your goal is to emphasize a sky, especially a dramatic sky. This works great with skies that hold a few clouds, or even thunderclouds, especially at sunset or sunrise, but it’s best to avoid this placement if you have a dull, clear sky unless you’re capturing something in the sky itself like an aircraft or the “Lone Tree” in Harbour Island, in the Bahamas. 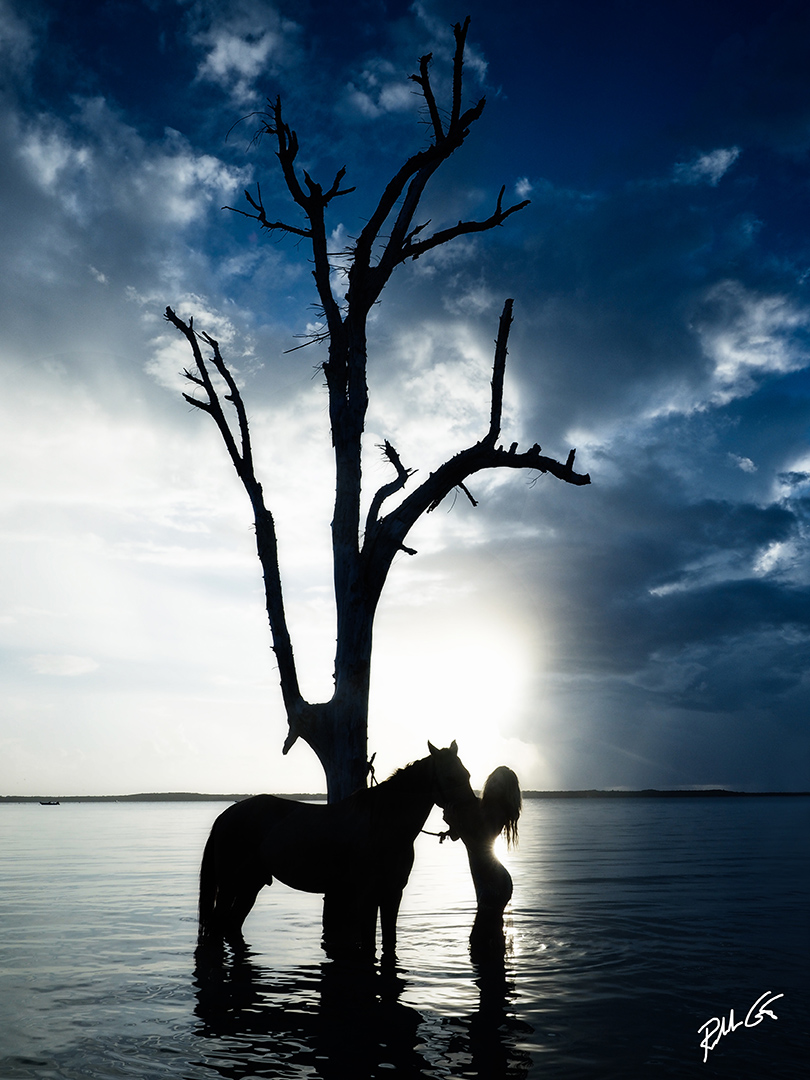 Even in this silhouette, I placed the horizon line at the lower third of the frame since the sky was interesting plus the tree’s height requires it too.

If your sky is boring, or you just want to emphasize the foreground in your image, adjust your camera angle so the horizon line rests up on the upper third of your image frame—though keep in mind, if you have a human subject as your main element do not let the horizon line chop their head at the neck or pierce through their eyes. The idea is simple and a high horizon line brings dominance to the lower 2/3 portion of the image.

One thing to avoid with high horizon lines is be careful not to distort your elements in the lower portion of your image. Learn to select the right lens and camera angle to avoid this while you still maintain a high horizon view point.

The no horizon effect is simply to avoid including any horizon, or horizontal line in your image, something you’ll often find in photos of surfers riding the waves or an outdoor photographer’s photo of the rolling hills of Tennessee. Basically, the rule here is when the sky doesn’t add an interesting element in the image, then just leave it out. 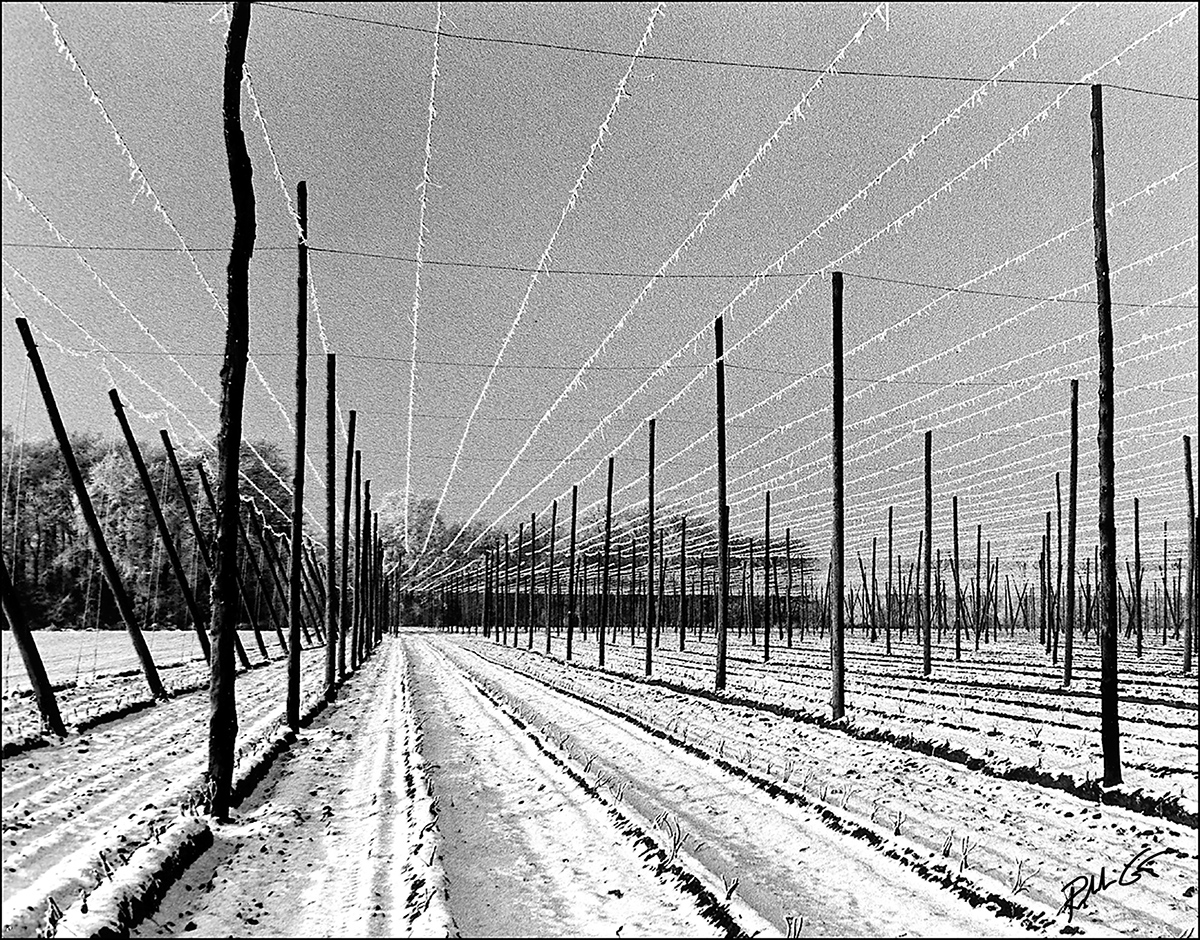 In this photo taken in Germany, notice how interesting the horizon, the vertical and leading lines draw you into the image plus how the snow is one horizontal layer, then the trees, then the sky.

There are times that a horizon can create a stair-stepped effect too, and this is important because photography in general is a two-dimensional medium. Let’s pretend for a minute that you have a dark sky, a defined horizon line, and a lighter colored ocean, this effect creates an element of three-dimensions similar to what the human eye sees.

Another form are actual stairs or steps themselves, try to incorporate them in your photo to draw the viewer down or up into your subject. You might also look for horizontal lines on fabrics, or patterns created by buildings, wood, metal or even by a stack of books. Learn to use horizontal lines and horizons to your advantage to take an image from boring to an image of impact.

There are other forms of lines equally important in photography, like implied, inherent, imaginary and even diagonal lines which I cover more in-depth in the article Photographic Elements–Lines, Lines, Lines, here on SunbouncePro.com.

So, whether you wake up drinking your coffee as you stare out the window or when you drive home from work, take note of the horizon we often take for granted in our photos—it might make you more aware when that fine art photo idea pops in your head while on location.

Rolando Gomez is a professional photographer and author of five photography books that has traveled to 45 countries for assignments. The former soldier and U.S. Army combat photographer has taught hundreds of photography workshops for almost two decades. A 2016, 2017 and 2018 Top Writer for Quora, his partial credits include Newsweek, Parade, Playboy, Rangefinder, Maxim, Rangefinder, New York Times, Stars & Stripes, and various other publications. You can find more of his work on AmericanoDream.com.
(Visited 1,356 times, 1 visits today)