A Professional’s Perspective. Whether I’m on a live video broadcast with social media, or at one of my photography workshops, someone usually asks, “How do you know which size reflector you’re going to use?” I usually chuckle at first, as this question can have many answers, some easy, some technical. 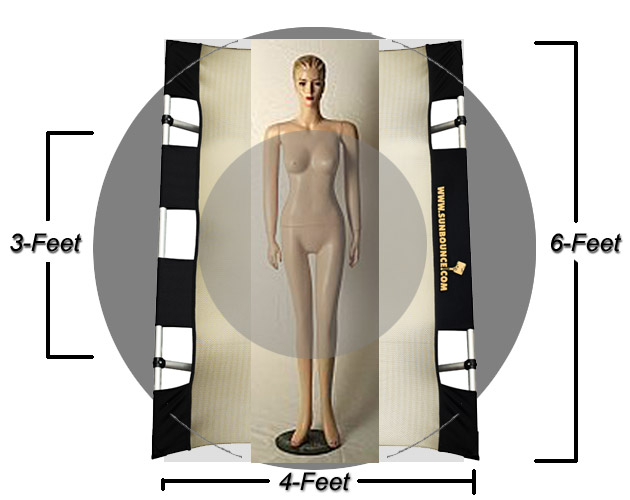 In this photo illustration you can see what a 4″x6″  SUNBOUNCE will cover in comparison to a 3- or 6-foot diameter circle reflector.

For example, it’s quicker and easier, though by maybe thirty seconds, to put together a  SUNBOUNCE MINI vs. their PRO version. The mini is 3-foot by 4-foot while the PRO is 4-foot by 6-foot. The Mini has two cross bars, whereas the PRO has three. Obviously the SUNBOUNCE MICRO-MINI is even faster to assemble with one cross bar and it’s only 2-foot by 3-foot.

So if I’m in a hurry, and probably without an assistant, the MINI is my choice, as I normally don’t carry a MICRO-MINI with me. Perhaps that’s my lazy answer. Now when I have an assistant, or a C-stand with a clamp, I’ll probably go for the larger Pro version with my favorite zebra fabric screen.

Now there are many different shapes of photography reflectors out there, from circles to triangles and even ovals. As I said in the Welcome post, you get what you pay for; hence, why top professional photographers, cinematographers, and videographers pay extra for rectangular-shaped reflectors like those from SUNBOUNCE. 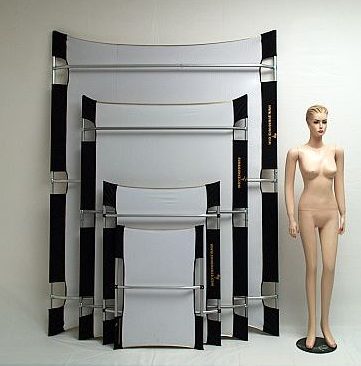 So let’s look at why most professionals rarely use round reflectors. First, round reflectors are basically small circles in comparison to your subject; thus they produce a more specular or harsher light source. If you’re trying to illuminate a 5’10” or taller fashion model with a 3- or 4-foot diameter circle, you will not evenly light her from head to toe. A reflector can’t reflect more light than from what it receives according to the physics Law of Reflectance. A flat reflector can’t increase the size of the reflected light either, though it appears like fabric reflectors do this.

This appearance of “enlargement” of the light reflected is caused by diffusion of a non-mirrored-polished surface, hence why some professional photographers will take reflector fabric and run it through a wash cycle to “season” the surface of the fabric screen for more diffusion. This added diffusion minimally increases the overall size of the reflected light shape and helps reduce the contrast of the reflected light.

This is the negative trade-off using a cheap round reflector. You’re reflecting, not projecting, a round light path barely larger than the size of the reflector itself, to illuminate a geometrically shaped larger rectangle, because a human standing is a tall rectangle, not a round object. In essence, you are using the middle rectangle section of a round reflector, thus throwing away the outer two-thirds of the (circle) light source, which increases the chance of spill-light on other elements in your scene.

So as you can see by the image posted, this is why I prefer, like most professionals, a rectangular  SUNBOUNCE photography reflector. If I’m working with a little help or a C-stand, I’ll use the largest reflector possible because the truth, not myth, is that the larger the light source, the sweeter, or softer the light is, or the more forgiving the light source becomes for the human skin.

While SUNBOUNCE does manufacture a “Big” reflector, my favorite that fits my shooting style is the SUNBOUNCE PRO, primarily with the Sparkling Sun or Zebra fabric and I also love to use the SUNBOUNCE MINI with the 3D Raindrops Silver reflector fabric screen. It’s the quality of light that makes a difference in any photo. And if I don’t have a C-stand or assistant, or I’m just being plane lazy, then I use the SUNBOUNCE MINI — it’s the same size as a medium soft box for my studio flash units, how can you go wrong? You can’t.

Rolando Gomez is a professional photographer and author of five photography books that has traveled to 45 countries for assignments. The former soldier and U.S. Army combat photographer has taught hundreds of photography workshops for almost two decades. A 2016, 2017 and 2018 Top Writer for Quora, his partial credits include Newsweek, Parade, Playboy, Rangefinder, Maxim, Rangefinder, New York Times, Stars & Stripes, and various other publications.
(Visited 2,088 times, 1 visits today)