Normally I don’t get a chance to capture images at my photography workshops as I’m too busy providing hands-on instruction along with ensuring everything from the models to the lighting flows smoothly. But a while I back, at one of my Las Vegas workshops, I took the time to capture a few images and teach the class a different, but not unique, approach to add mood to images via the camera’s white balance. The specific approach was to create a tungsten photography mimic from the old film days, creating a blue mood in the photos with daylight and the digital camera’s white-balance settings. 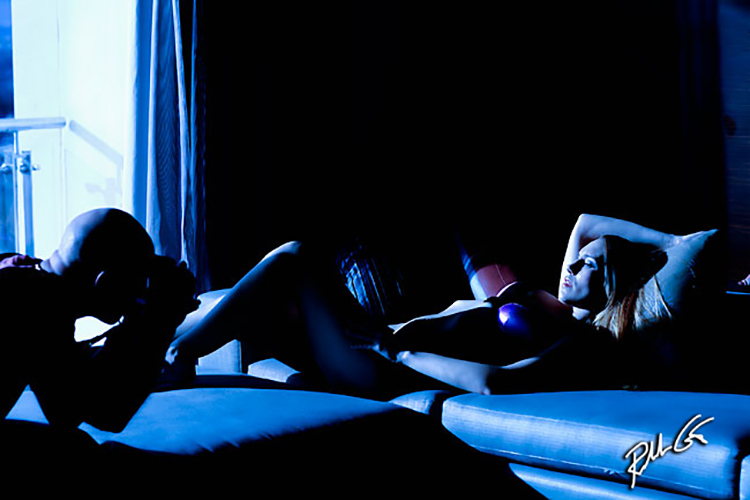 I took this picture of Jolene as she was photographed at our photography workshop with the tungsten photography mimic camera settings.

The process is simple, you simply set your digital camera white balance to manual mode, then enter the exact Kelvin degree of color temperature. For the tungsten to daylight effect, simply set your white balance to 3200 or 3400 Kelvin. If your camera doesn’t allow you to manually set the white balance to an exact number, simply set it to the incandescent or tungsten mode. All settings should provide you with a blue or cool color cast when working with natural daylight during the middle of the day. Try and keep your ISO to the lowest possible only because you’re working with daylight that is impacted by the Sunny 16 Rule. 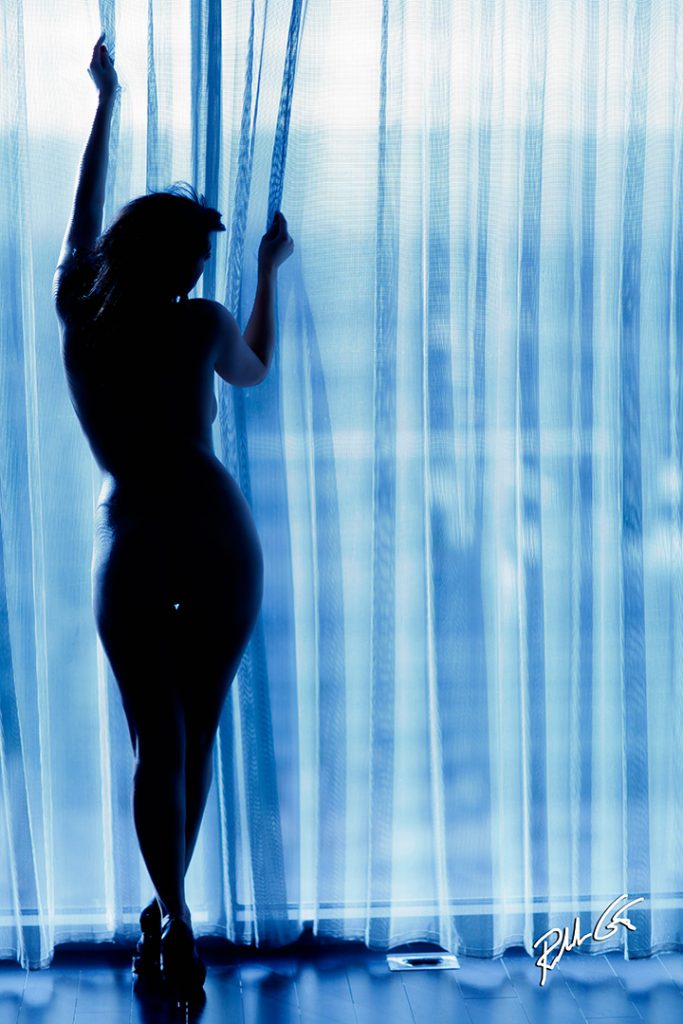 Silhouette photography can also be practiced indoors and by adjusting your white-balance to tungsten, you’ll get a blue daylight background.

Basically, unique technique with digital cameras and white balance settings is really a “digital deviation” of something easily done in film by merely exposing tungsten light-balanced film with daylight-balanced light sources. Digital just makes it easier and on-the-fly vs. the old film days of buying film to create the tungsten photography mimic. So, this photography concept is not new, though the method on achieving these results simply went from analog to digital.

Yes, there are digital filters in photo imaging software plus plugins out there to achieve similar results in postproduction, but waiting on postproduction doesn’t give you instant feedback from the photo during the shoot. Postproduction only gives gratification after the final results.  The problem with the latter gratification is that both you the photographer and the model can’t get into the true concept of a “blue” icy shoot, not to mention, instant gratification and feedback provide momentum in a shoot and other creative possibilities.

It’s a known fact that color creates or can set the tone of mood in people. In photography it’s no different, color, as does black and white, will help set the tone of the images created during the actual photo shoot itself.  While everyone’s interpretation will vary when it comes to photos with a dominating colorcast or hue, blue is a “cool color” and so we naturally associate it with a colder or an icy meaning.

Blue is moody like blue Mondays but blue is often associated with happiness of new life too, thanks to the fact that normally newborn babies all have blue eyes. While red is an ironic color too, as it’s often associated with romance and warmth, along with anger or fire, I chose blue by simply making my DSLR think the light source was tungsten, when it fact it was the natural, ambient daylight that illuminated the scene.

The colors we choose also helps us identify with our own moods—and in the case of these photos, my concept at the time related more to the recent sleuth of record breaking snow, ice and coldness throughout the United States. Though Vegas was only about 20-degrees warmer at that workshop, the recent chilly weather, even on a sunny day, seemed the main topic in conversations about as much as photography of models. The ironic part of the shoot was that I’d listened to my models complain about how cold it was, but after spending a few minutes, indoors, with the swath of sun cutting through the window glass, my models were sweating and asking to turn on the air condition.

The best part when creating these photos with the tungsten photography mimic was watching the models’ reaction to the images they saw on my digital camera’s preview screen.  Their enthusiasm along with mine, encouraged some of the photography workshop attendees to change their white balance and try the same concept. Some liked it, some didn’t, as this tungsten photography mimic is based on personal style and taste.  Personally, I liked it at this location, though I wouldn’t practice this at every location, as we do not look at the world through deep blue glasses or 80A photography filters.

Sure, we can argue that shooting in the camera’s RAW format will allow you to play with white balance all day long in postproduction, the problem, I don’t have all day to play—so I get it done in the camera correctly.  And again, both the model and I respond to the instant creative effect of the mood and style of the image we were trying to create, right there on the spot—at the shoot!

This marriage of the minds usually results in fantastic images and a prolonged shoot, as you both are now really into the shoot psychologically. This is when the passion flows, you both feel it, you both connect—a shared feeling, a shared vision, a shared result, a shared sweat to get there—yes, it’s work, but so are photography workshops.

Rolando Gomez is a professional photographer and author of five photography books that has traveled to 45 countries for assignments. The former soldier and U.S. Army combat photographer has taught hundreds of photography workshops for almost two decades. A 2016, 2017 and 2018 Top Writer for Quora, his partial credits include Newsweek, Parade, Playboy, Rangefinder, Maxim, Rangefinder, New York Times, Stars & Stripes, and various other publications. You can find more of his work on AmericanoDream.com.
(Visited 197 times, 1 visits today)