An Extra Punch of Light, Without the Harshness. Sometimes photographers like to mix light sources, such as when they have to overpower the sun with flash and take the Sunny 16 Rule into account. This is one instance when a photography reflector can add some supplemental lighting by creating a reflector “kick” that acts as a “kicker light” to help soften harsh shadows caused by direct overhead sun or small light modifiers on studio strobes. 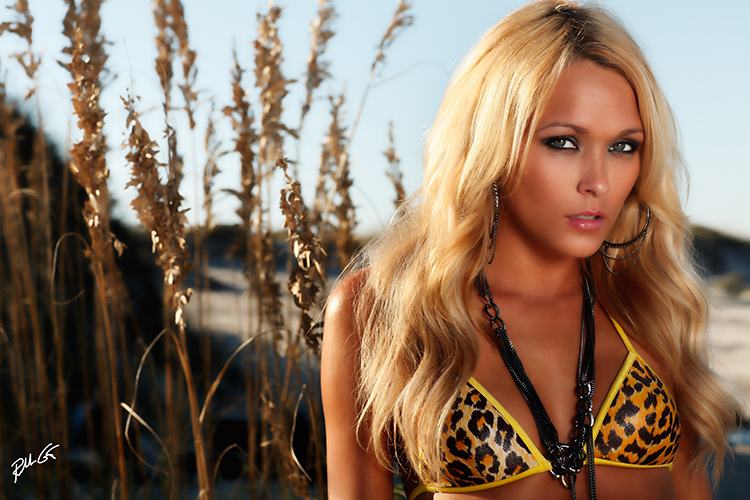 This photo is illuminated with a studio strobe pointed into a SUNBOUNCE PRO reflector fitted with a ZEBRA fabric screen.

First, to help you better understand this requirement for soften shadows, let’s look at the Sunny 16 Rule which states, that on a normal, sunny day, if you set your shutter speed to the equivalent of your ISO (film speed in the old days), then your aperture, or F/stop, will be F/16.

There are a few things to take into account, if it’s early or late in the day, the sun will have less intensity so your aperture drops to a lower value, anywhere from F/4 to F/11, it all depends on the time of day. And if the outdoor sunlight is coming through a window, low-E or double pane windows will reduce this value too. Many photographers and even videographers think of kick lights as accent or rim lights, but in the case of making a reflector a kick light, it isn’t meant to act as a prominent light accent, it’s meant to soften the shadows under the chin and sometimes as a soft fill of your subject that will add a brilliance in their eyes.

For example, while photographing a subject with a simple soft box or beauty dish, depending on the distance a light modifier is placed from the subject, and the light modifier’s relative size to the subject, shadows underneath the chin and or around the nose, can either be harsh or soft. Obviously the larger the light modifier and the closer it’s placed to your subject, the softer the shadows, but there are times that the opposite occurs and this is where a reflected kick light comes to play. 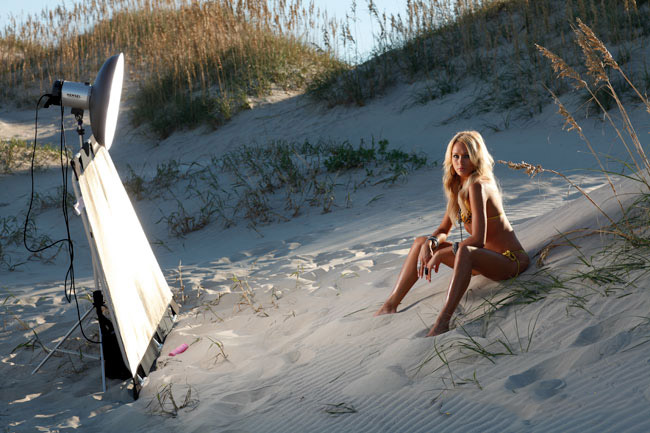 In this lighting set-up we use a SUNBOUNCE PRO reflector as a “kicker fill light” that allows us to combine three forms of light quality, reflected, ambient sunlight, and artificial.

The easiest method for using a reflective kick light is to have an assistant hold a SUNBOUNCE PRO or MINI photography reflector near the subject’s face, but out of camera frame. There are times however were an assistant is not available and during these times, I simply place the reflector underneath the main light source and support it using the light stand that the main source is mounted upon. This placement also reflects, or redirects, the lower light rays of your artificial light source.

The photo above is a great example of using a kick light, plus natural light and artificial light. Here I used the sunlight, a studio light and a SUNBOUNCE PRO reflector. Basically, a combination of natural sunlight that provided side and fill light, a studio strobe that provided the main light for the face and reflected light for the kick. While this technique was outdoors, it’s just as easily accomplished in your photography studio.

Though when working outdoors, you have to consider the Sunny 16 Rule and in this case, during this time of day when the sunlight is less intense, the rule brings us down to an f/8 or f/11 aperture value, hence why the model’s hair is highlighted from the Sun. Notice too how the direction of the sunlight is from the side, not directly in front or even directly behind. The second obvious choice is to place the model so the Sun lights her from the back, thus creating highlights in the hair and a nice rim light around the body, but in this case, our approach was a side lighting effect.

I had the model pose where the sunlight struck her right side and then had her slowly turn her face, without moving the rest of her body, away from the Sun at a point where the sunlight quit spilling on her face (avoided spill light) and nothing more, otherwise the neck would become too twisted. By using the sunlight from the side, I also avoided any direct sunlight lens flare and avoided any focusing struggles, as backlight causes the model to appear as a silhouette which can make it difficult for the camera focus.

In addition, the “PRO” version of the SUNBOUNCE was used because it’s 4-foot by 6-foot in dimension — reflectors work like any light modifier, the larger, the softer, the smaller the harsher. With this larger size, I’m guaranteed softer, reflected light as I’m able to place the SUNBOUNCE photography reflector close to the model and keep its size large in relation to the distance from the subject.

I also took the Sunny 16 Rule into account and adjusted for the rule as the sun starts to go down, its angle is now more oblique and its intensity is less than during the middle of the day. This is also why I photographed the model closer to the Golden Hour, not at 12-noon. By waiting for the less intense sunlight, I’m able to keep my aperture value lower while still utilizing reflected light.

In the end, you can see how the slight reflector kick gives a soft, but added punch beneath the chin, not to eliminate the shadows, but to soften them. Photography is a one-dimensional art form, however, using chiaroscuro, or the intermixing of lights and darks (shadows), helps create the illusion of depth for a more flattering photo and this was all done with mixing artificial, natural and reflected light sources.

Rolando Gomez is a professional photographer and author of five photography books that has traveled to 45 countries for assignments. The former soldier and U.S. Army combat photographer has taught hundreds of photography workshops for almost two decades. A 2016, 2017 and 2018 Top Writer for Quora, his partial credits include Newsweek, Parade, Playboy, Rangefinder, Maxim, Rangefinder, New York Times, Stars & Stripes, and various other publications.
(Visited 1,502 times, 1 visits today)