Which is it? Confused?

It’s not uncommon to hear photographers describe light as artificial or natural light, but more often than none, I hear photographers at my photography workshops confuse the terms, ambient, natural and existing. Throw in artificial light, whether it’s flash, tungsten, HMI or LED’s, and you wind up with a lot of misused terms when it comes to the description of light, so I’ve decided to delve into this matter. 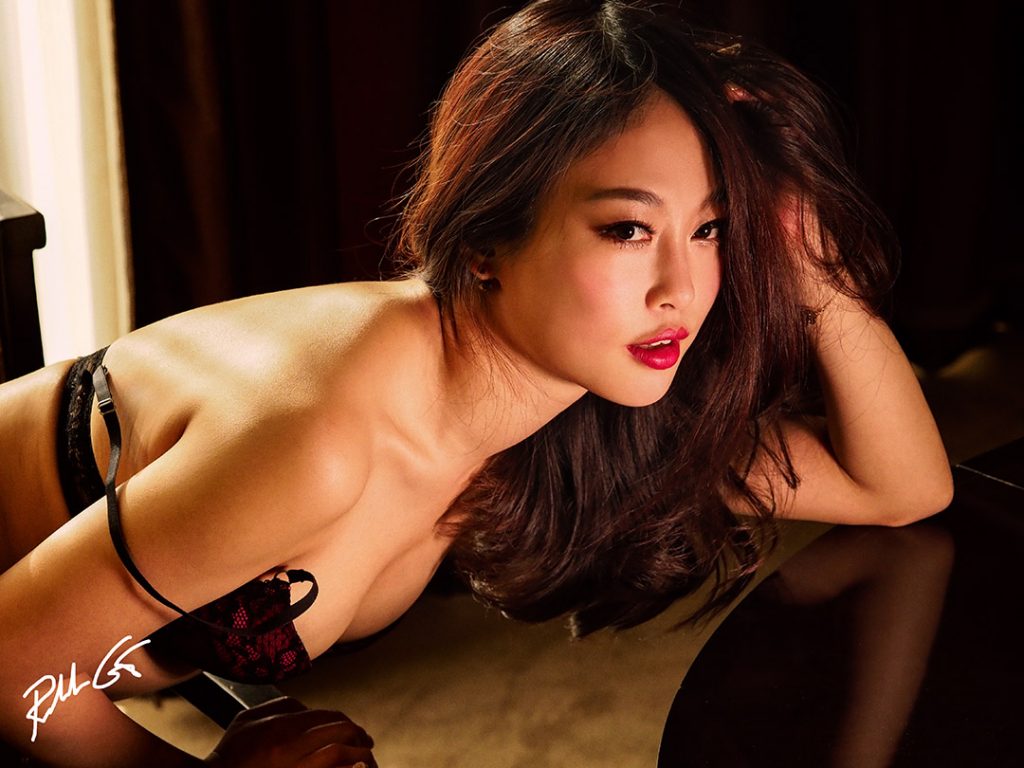 This photo of Grace was captured indoors with ambient light from the curtains, created by natural light outdoors. Her face is illuminated with an LED light, an artificial light.

First, since I’m not a physicist and I’d probably get confused trying to explain the quantum theory of light, I’ll only a percentage of artificial light as most photographers know that on-camera flash and studio flash are artificial forms of light. In photography, normally there are two common forms of artificial light, intermittent and continuous—both are emitted light.

Intermittent light is your typical flash unit often found in the forms of speedlights, monolights, ringflashes, strobes or flash heads. Continuous lights come in various varieties too, Kinoflos, florescent, LED’s, tungsten, HMI and the list goes on—basically, any type of man-made light that requires an energy source, continuous or intermittent, emits artificial lighting when it comes to photography. 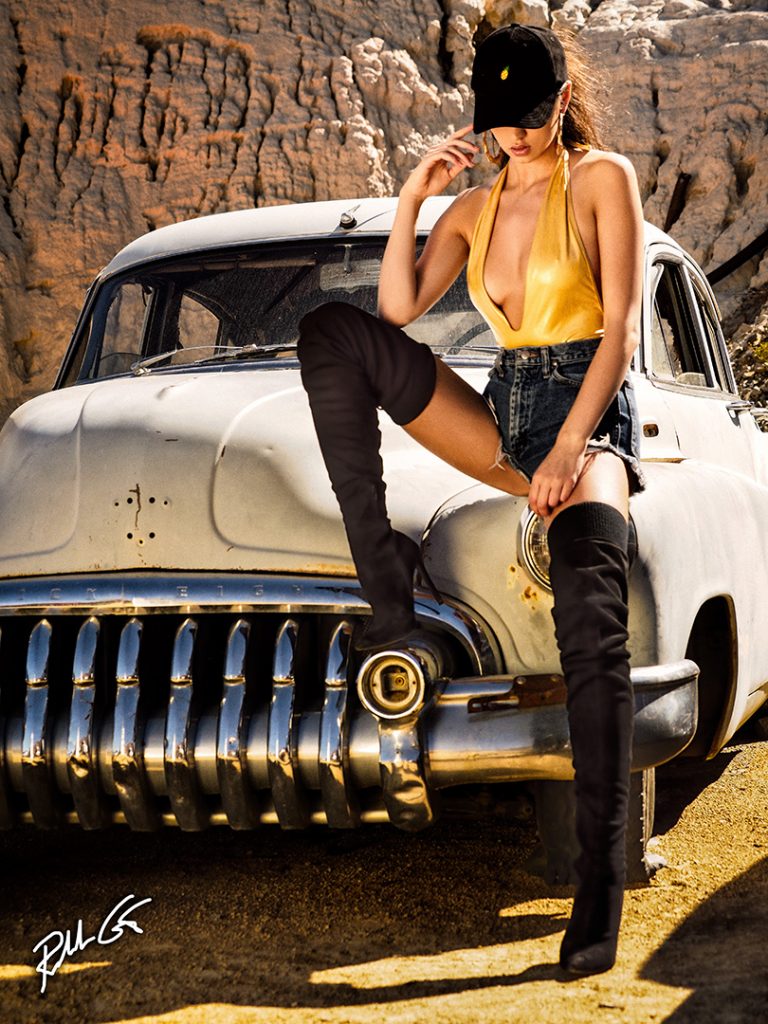 The natural light is the main ambient light in this scene with model Dilara. She is highlighted with sunlight being reflected off a SUNBOUNCE PRO with a SPARKLING SUN fabric.

Each form of artificial light has its own qualities, such as harshness or softness, specular or diffused, color rendition index and specific wavelengths to name a few. These lights vary in color temperature, measured in Kelvin, the most common types are on average, 5400K for flash and 3200K for tungsten. So now that brings me to the main topic of this photography tip, natural, ambient and existing light—of which daylight can play different roles in all three.

When photographers go outdoors and photograph models out in the open, they are working with natural daylight, assuming they are not using fill flash to either lighten up shadows or overpower the sun with flash. Flash aside, photographers use this natural light, or daylight, to illuminate their subjects—in essence, photographers are merely capturing the reflected light off their subjects. In order to use daylight properly however, photographers have to understand a few basics. Two of those basics, which are also part of color theory, are that reflected light is what the human eyes and cameras capture to determine hue, brightness and saturation of color. Hence, without light, we see nothing.

One other factor involved in determining shape, color, contrast and form in what the camera and we capture is the physics rule, the Law of Reflection, aka the Angle of Incidence Equals the Angle of Reflection. It’s this rule that also determines if reflected light is specular or diffused.

Specular light is formed by equal angles of light striking a smooth surface and reflecting back. This is a more focused, reflected light and in photography, it’s our highlights for the most part, or any bright spots in our final image. It’s also harsh light. Diffused light is light that strikes irregular or not so smooth surfaces, thus the light scatters in many directions, less focused, less contrast, softer and sweeter light. All surfaces, smooth or not, reflect some form of specular and diffused light, but in commonality we see more diffused light around us, thus this is how most photographers illuminate their subjects as the light appears more natural.

Specular or diffused light is also a transmitted form of light in photography. A 7-inch conical metal reflector focuses light from a studio flash head, whereas if we remove the metal reflector and replace it with a soft box, the translucent inner baffle and the outer translucent front material diffuse the light that passes through it. The light rays emitted from a soft box are scattered in many angles, thus a less focused light is diffused light and shadows have softer edges. The same is said of a beauty dish, as the focused light hits the front, small domed reflector, it’s specular, then as that reflected light hits the 22-inch pan, found in most beauty dishes, the light becomes diffused as it’s reflected off the larger pan.

It’s all about the angles and this is why you hear me brag about the sweet Moab light, specifically during the golden hour, the last hour of sunlight in the day. But rarely do most photographers understand why and often I’m confronted with, “Why go to the Moab for the golden hour, it’s no different than any other part of the world?” My answer is simply not necessarily true. Let me explain. 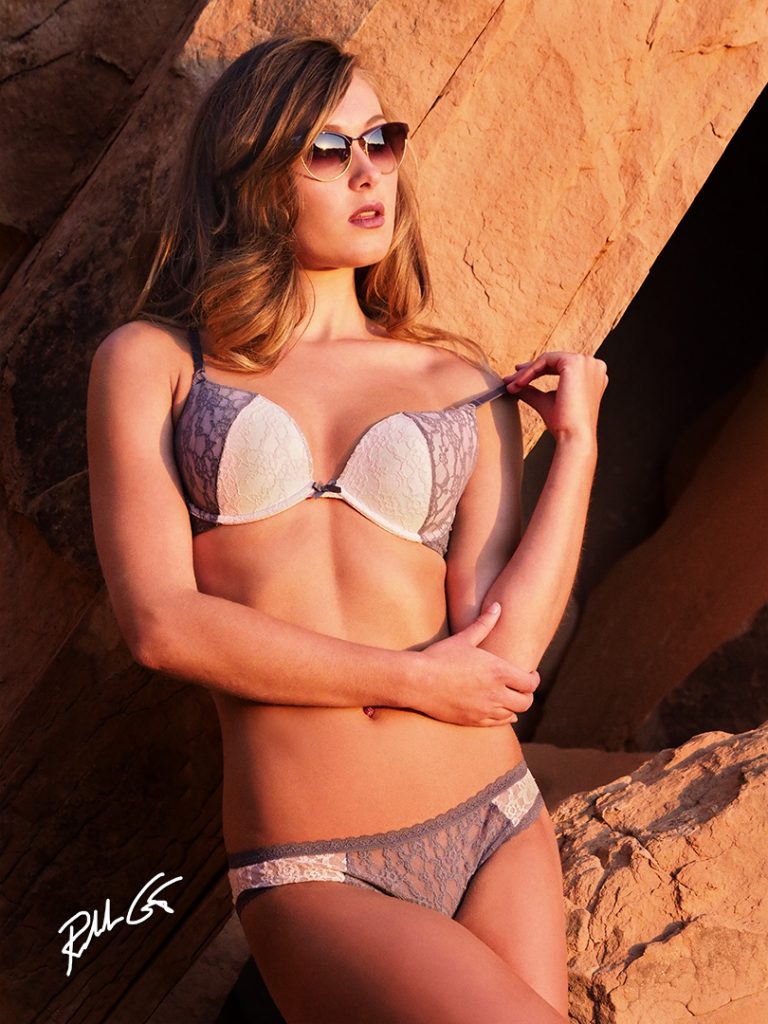 Rebecca is illuminated with the Moab golden hour natural light.

Yes, the golden hour in the Moab shares common qualities with the golden hours throughout the world in that it’s basically the last hour of daylight of a typical day. It’s also a less intense and warmer light than midday light. The warmth is created because at that time of day, the Sun is at a more oblique angle to the Earth than at noon. The light emitted from the sun travels further to reach us than when it’s directly overhead in the middle of the day. The shorter blue wavelengths of the spectrum are absorbed faster and scattered by the thicker atmosphere, thus leaving us with the longer wavelengths of red and yellow.

Ultimately, it’s the atmosphere that affects how light is scattered and in the canyon lands of the Moab, my only guess, it’s the atmosphere that makes this golden hour sweeter, than the polluted skies of major cities. Perhaps this is why in parts of Thailand, the land of the red-rising sun, especially in areas like Bangkok, the sun leans more to red during the late afternoons as the atmosphere is more polluted there than the atmosphere in the vast, less-polluted canyon lands of the Moab. Another assumption about the Moab light is in fact, on the more, dusty days, the haze produces an even sweeter warm colored light because the finer dust particles that help scatter the light originate from the warm red and yellow colored rock.

Ambient light is the light that surrounds us, whether it’s created naturally or artificially, provided that it’s continuous. A television set, when it’s switched on, produces ambient light through transmission of light, and when it’s powered off, it reflects light to let us know it’s still there. Basically, ambient light is existing light, the light that exists around us. Confused? Think of it this way, natural light is sunlight, and after it’s reflected, dispersed, diffracted, diffused, scattered, absorbed and/or refracted, the remainder of light is what we call ambient light or existing light.

In photography, ambient or existing light outdoors is found in open-shade or non-shaded areas. This is where a photographer must understand, that un-shaded areas are hotter and shaded areas are colder—isn’t that’s why we stand under a shaded area on a hot summer day, to cool off? And if we associate the coolness with color temperatures then we can easily remember that the light found in shaded areas is a cooler blue than non-shaded areas. This is why our digital cameras have white balance settings to adjust for this cool light. Now let’s take it indoors, the mother of all shade, where light is not necessarily natural, but it’s certainly exists.

Indoors our light is warmer. Why? Because the light found indoors, with the exception of fluorescently lit rooms, is normally illuminated by household bulbs. These incandescent bulbs lean towards tungsten colored light—it’s all about the wavelengths of light at this point. The wavelengths are longer, thus the warmth. It’s not about the ambient air temperature, it’s about color temperature emitted by the light source.

Rolando Gomez is a professional photographer and author of five photography books that has traveled to 45 countries for assignments. The former soldier and U.S. Army combat photographer has taught hundreds of photography workshops for almost two decades. A 2016, 2017 and 2018 Top Writer for Quora, his partial credits include Newsweek, Parade, Playboy, Rangefinder, Maxim, Rangefinder, New York Times, Stars & Stripes, and various other publications. You can find more of his work on AmericanoDream.com.
(Visited 1,188 times, 1 visits today)