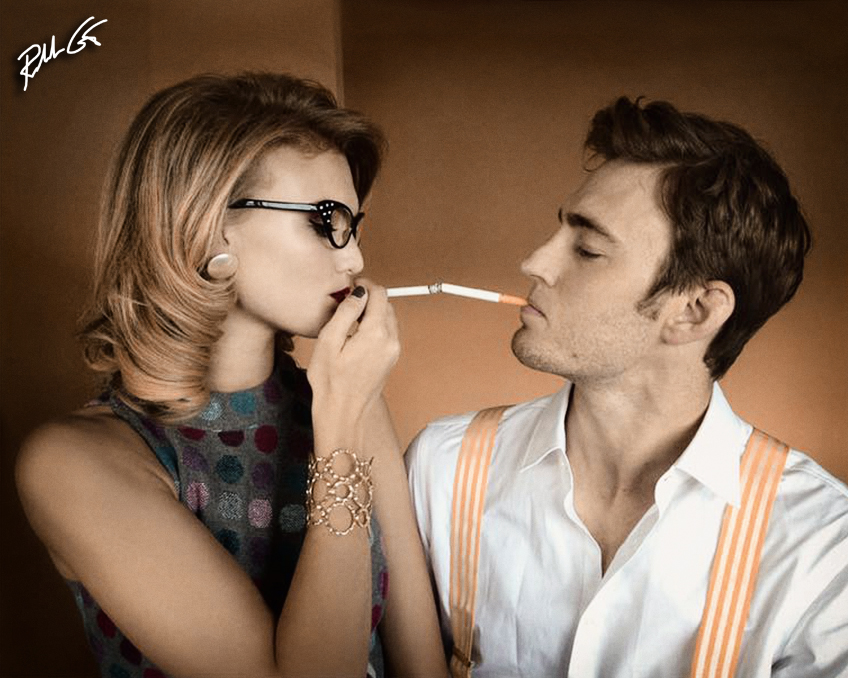 While an active-duty soldier in the U.S. Army stationed in Germany in the late 80’s, one influencer I stumbled upon while perusing through a bookstore in Mainz, was Jeanloup Sieff. I actually purchased a set of small reproductions of his work that I would study on my free time and one that caught my eye was a photograph of a man and woman, both with cigarettes in their mouths.

Originally published in Harper’s Bazaar in 1964, the black and white photograph connected the two subjects with their cigarettes plus the gaze in their eyes. My eyes went straight to the cigarettes and then to each subject, back and forth, keeping me attentive for a bit of time — this photo taught me the importance of interaction in an image. Seiff’s photography interacts with the viewer through its subject matter, often sensual with a common thread of elegance and human warmth.

Though I often wonder if Sieff wasn’t inspired by Ernest Hemingway as in the 1952 movie The Snows of Kilimanjaro, based on Hemingway’s short story, there is a similar scene where a couple lights their cigarettes together. All greats are inspired one way or another and Sieff was no different. 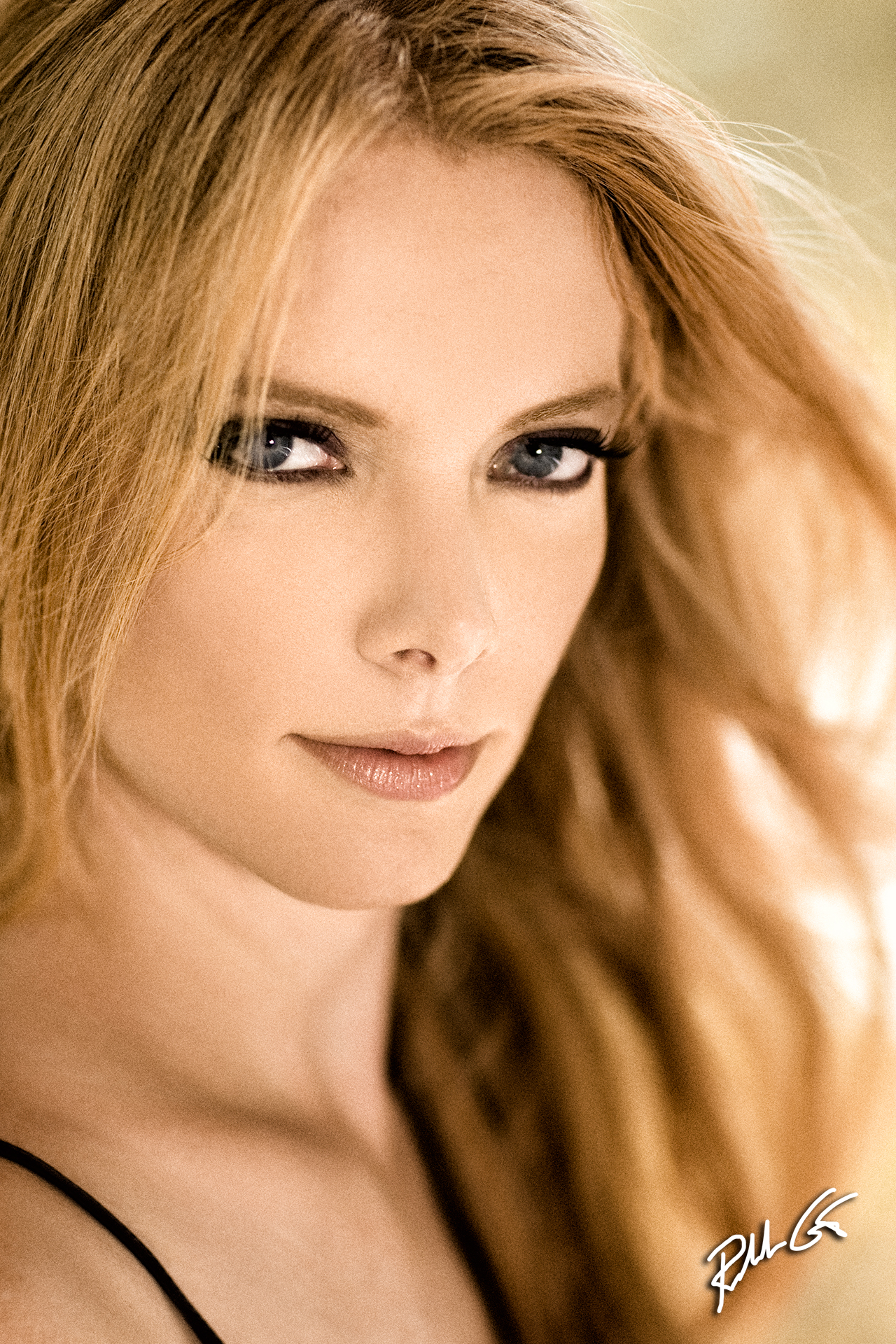 Take what you studied from other photographers and apply it to your photography as I do.

I began my photojournalism career as a sophomore in high school where I was a school photographer and our journalism department published a monthly newspaper and a yearbook. While I spent much time in the darkroom and shooting at school events, I also spent time studying and admiring other photographers, and it was then that Yousuf Karsh’s lighting mastery caught my eye.

Karsh credits his photography career launch to his Life magazine cover photo of Winston Churchill, 15 years after he started photography. He is known as one of the top portraitist of all time photographing some of the most notable people on the planet. In fact, Karsh was listed in the International Who’s Who (2000) of the most notable 100 people of the century, and ironically, only 49 people on that list he had not yet photographed.

His influence to me comes from his own words, “Within every man and woman a secret is hidden, and as a photographer it is my task to reveal it if I can. The revelation, if it comes at all, will come in a small fraction of a second with an unconscious gesture, a gleam of the eye, a brief lifting of the mask that all humans wear to conceal their innermost selves from the world. In that fleeting interval of opportunity the photographer must act or lose his prize.”

I first heard the name Robert Capa when a Sgt. 1st. Class, one of the editors at the 5thCorps Public Affairs office, looked at one of my military photos of soldiers in a live fire combat exercise firing their weapons and anti-tank weapons in the field. Unfortunately that was 25 years ago so I forgot the sergeant’s name, but I remember him staring at my photo and stating, “It has a Robert Capa feel to it.”

That statement along with the fact the editor chose my photo for publication was enough for me to start my research on Robert Capa, one of the founders of the legendary Magnum Photo Agency, where eventually Jeanloup Sieff would become a member of the still operational and highly respected co-op of top photographers.

Four years later, the U.S. Army selected nine journalists and one photographer to attend their Advanced Photojournalism Course at the University of South Carolina. It was an eight-week upper-level college credit course and our professor, Dr. Keith Kenney, was hard on us, and for good reason, to make us better photographers. As the only photographer chosen that year for the program, I chose Robert Capa as one of my research paper topics and Kenney liked my choice based on my portfolio.

In that research I read one of Capa’s books, “Slightly Out of Focus.” Capa was a great photographer and in his book he focused on “life, love and war.” I really enjoyed this book which at times brought laughter as I read it, but most important, what I learned from all my research about Capa, was that the best photographers arrive early and leave last to get the greatest shots no one else will get

Helumut Newton was catapult into fame for his nude photography rather than his commercial magazine work.  It’s been said that Simon de Pury, the head of the New York/London auction house Phillips de Pury & Company, while having a discussion with Helmut Newton about the then upcoming inaugural show for his Zurich gallery, asked Newton, “…What else do you have?” Newton replied, “My landscapes, but nobody wants to see those.” 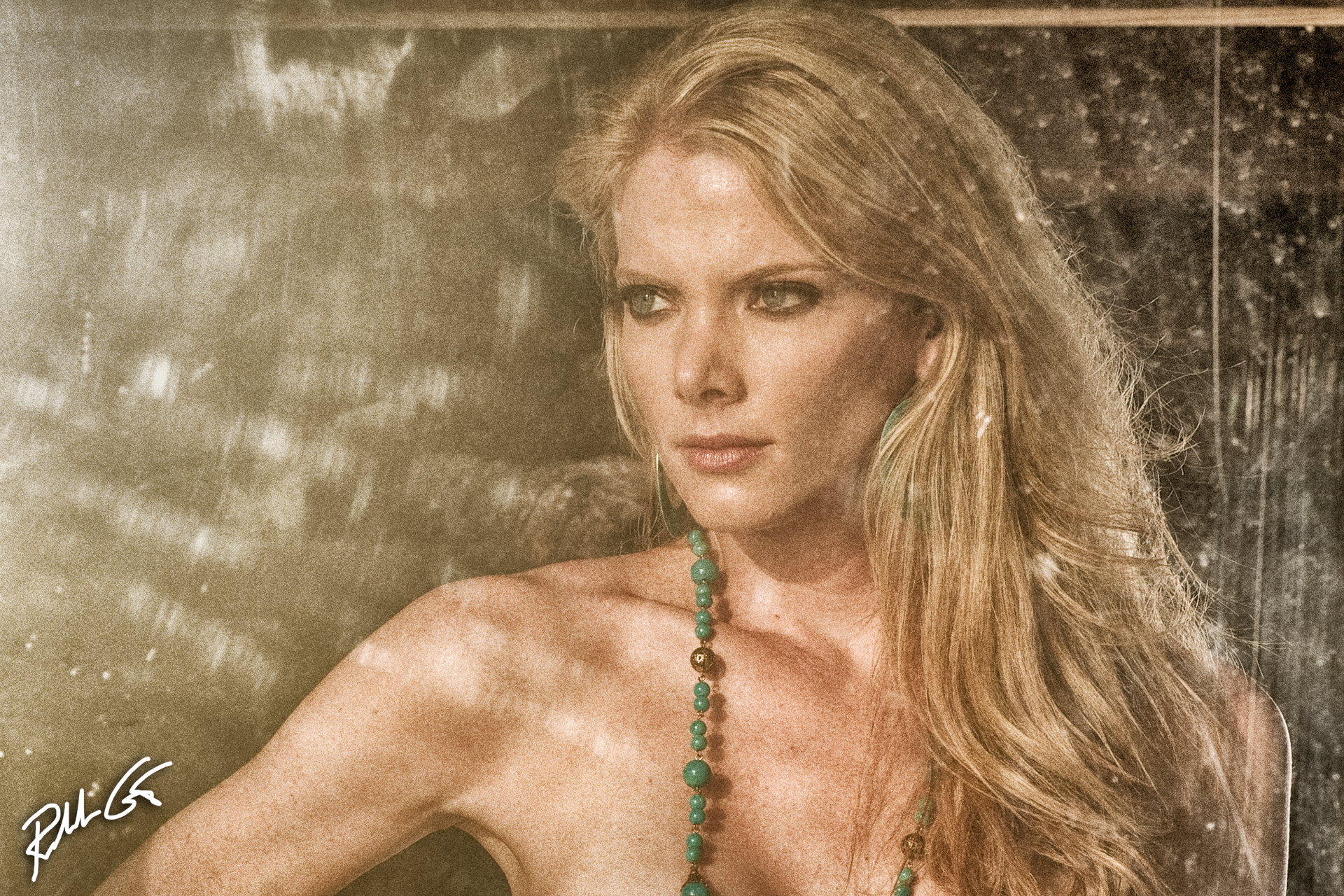 I captured this photo through glass. The model is actually indoors and I stood outside to capture this image.

Newton was correct and soon “Sex and Landscapes” was conceived for that inaugural show in 2001. While undoubtedly the late Newton help put the “politically correct” in nudity over the years, it’s not that nudity is so bad in our private conscious, it’s the difficulty of the use of the word in our vocabulary and the use of nude images in our visual arts — like a fear, our own society is the guilty culprit and it’s time for us to “grow up” and accept the beauty nudity brings. With the fact I’ve traveled and worked in 45 countries so far, and lived in Europe for three years, I can say this problem with nudity is a more a U.S. problem than a European problem —perhaps that’s why many great artists originate from Europe.

I’ve known Robert Farber for over 20 years now and I consider him a personal friend plus mentor. Recognized by the Photo Manufacturers Association in 1987 as the Photographer of the Year, Jacqueline Kennedy Onassis brought Farber into Doubleday for the publication of his book “By The Sea,” that would then win the Art Director’s Award for color photography. In total, Farber has authored many books, including “ten books of original collections of his work that have sold over half-a-million copies, four of them revised into later editions.”

Farber’s photographic work is recognized worldwide throughout galleries and museums. He’s known for his “painterly, impressionistic style that captures the essence of composition in every genre, including nudes, still life, landscapes and architecture.”

Farber never told me once how I should shoot, though he’s provided some critiques and advice. Farber was the first personthat told me to go teach photography workshops, write books and magazine articles, plus ensure sure you get paid your worth. I remember him telling me once, “There are no secrets in photography because it boils down to execution along with a creative eye.” 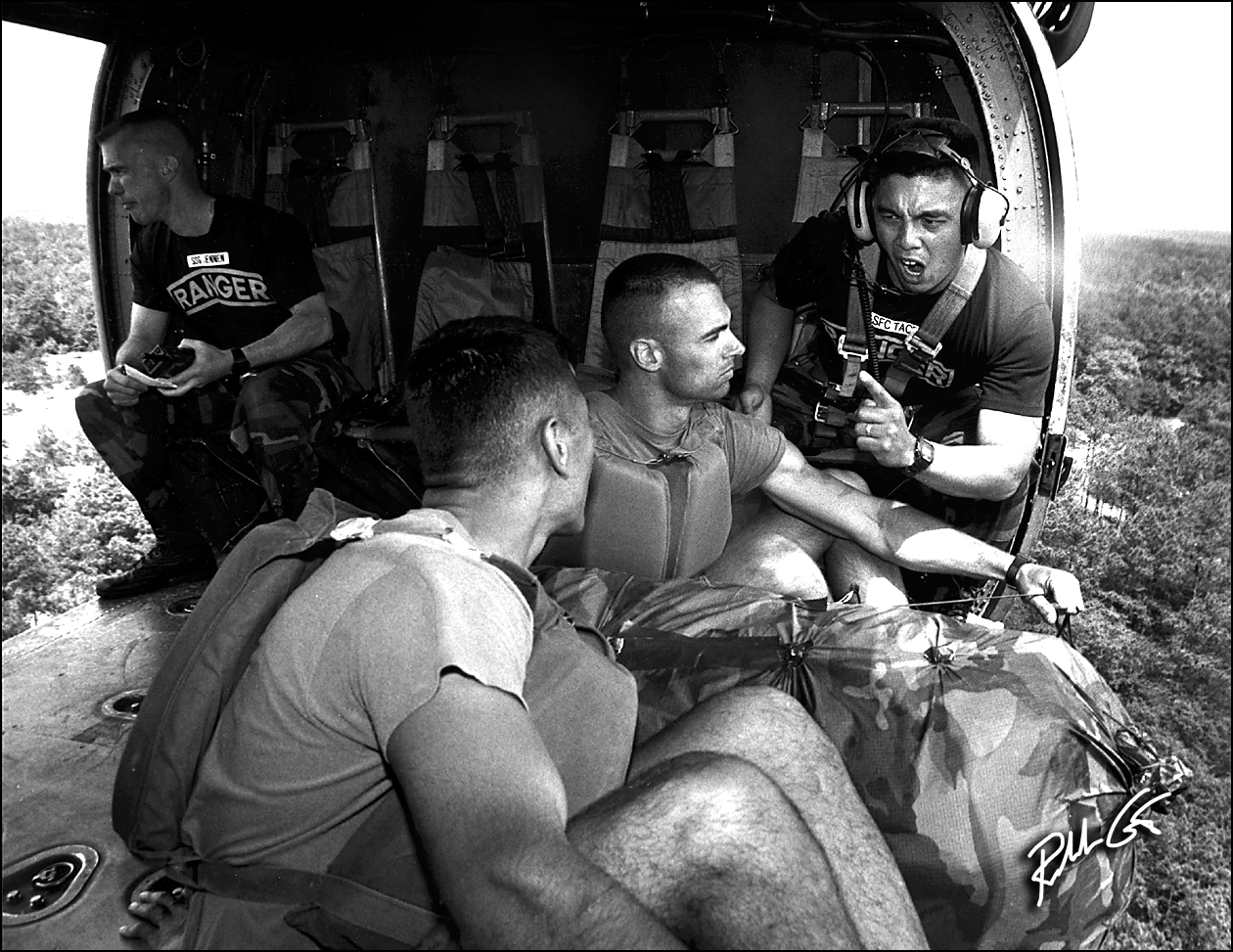 This is one of my most iconic photographs from my army combat photography days as an active-duty soldier for almost nine years.

His biggest influence was telling me that I have a photojournalistic style and I should never lose sight of that style. He’s always stressed the importance of style and photographers developing their styles. Think about your photographic style as your brand or trademark — that is how people will recognize your work. Once you’ve found your style, tweak it, but don’t let others try and force their styles on you. The public doesn’t demand copycats, it seeks originality.

I first met James Nachtwey in 1994, eight years after he became a Magnum Photo Agency member, when the U.S. Department of Defense had selected me for their “top 25 military photographers” from the Army, Navy, Air Force, Marine Corps and the Coast Guard that would attend the Dept. of Defense World-Wide Combat Camera Workshop in Ft. Meade, Maryland. 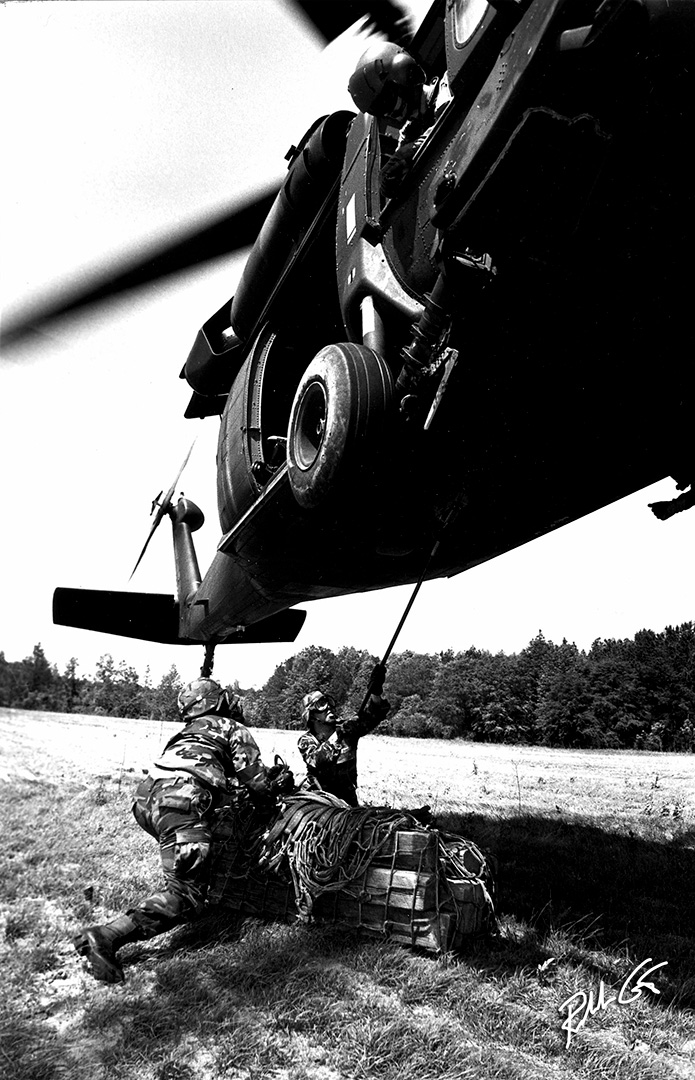 I often draw from my photojournalism roots but also from inspiration from other master photographers.

Upon our arrival, we were divided into five groups of five military photographers that were assigned a notable civilian photographer. These photographers included Magnum photographer Eli Reed; the photo editor and at the time the only female ever as the National Press Photographer Association President, Mary Lou Foy; the chief of photography from the Denver Post and former White House Staff photographer, Susan Biddle; the 1993 Joseph A. Sprague Memorial Award winner and finalist for the Pulitzer Prize, Bernie Boston, plus several other notable photojournalists.

We would spend a week with these notables who gave us assignments we’d have to document on slide film and our film was processed overnight for critiques amongst every civilian photographer. At the end of that week of assignments and critiques, these photographers, along with Nachtwey, who to this day is one of the most highly award-winning photographers of the world, chose the top five photographers out of the 25 in no specific order. It was truly a learning experience and I left there with job offers to work for the Los Angeles Times, Washington Post, Miami Herald, Denver Post, and a few others, but unfortunately I still had over a year left on my military contract.

I was appreciative of the selection into that top five group, but was more thankful of the wealth of knowledge learned from all the civilian photographers there. In reality, they all influenced me in some manner or another. Nachtwey influenced me in knowing that he was one of the judges that chose me into that top five group, but more important, I remember discussing with him why he preferred TRI-X 400 film vs. T-MAX and his answer was that the TRI-X 400 film had grain while T-MAX had a muddy grain-less structure. He explained to me that grain made for sharper printing when it came to publications and he also told me his film was always developed in D76 diluted one to one at 68 degrees.

That day I learned the importance of grain when it came to printing and half-tone separations, plus how the most highly awarded photographer in the world kept things simple and traditional. Around 15 years later I saw Nachtwey at the annual Photo Plus Expo in New York. We were both speakers that year, him of course a “keynote” speaker, and while having a lunch break in the speakers room, I approached him and reminded him what he had taught me in 1994. We chatted briefly then I left the room to conduct my lecture that day.

So those are six photographers that continue to influence photography including my photographic style. Are those the only six, no, there are others. I share these with you to hopefully give you an insight of what impacts my creations in photography along with past muses. While finding a muse is not an easy task, finding influencers is as simple as doing research, you don’t have to personally meet them to understand them.

I never met Jeanloup Sieff, Yousuf Karsh, Robert Capa, or Helmut Newton but I have studied their photographic works and their lives enough to feel as though I’ve met them. While those four are all in their heavens, their photography continues to influence me today and I’m sure others too, and if you’re unfamiliar with any of them, research them. You don’t have to go to the museums, bookstores or libraries like I did, just Google. Do it. Get influenced, it’s the first ingredient of two that will fuel your appetite to create great photographs.

Rolando Gomez is a professional photographer and author of five photography books that has traveled to 45 countries for assignments. The former soldier and U.S. Army combat photographer has taught hundreds of photography workshops for almost two decades. A 2016, 2017 and 2018 Top Writer for Quora, his partial credits include Newsweek, Parade, Playboy, Rangefinder, Maxim, Rangefinder, New York Times, Stars & Stripes, and various other publications.
(Visited 245 times, 1 visits today)