What Should I Charge? I’m constantly asked by photographers “What should I charge?” This seems like a million-dollar question, especially in today’s economic times where some photographers have reduced prices just to secure paid shoots. The sad part of it all, photographers are undercutting, or as they say in the business, “low-balling” and it does nothing but impact the future of professional photography. 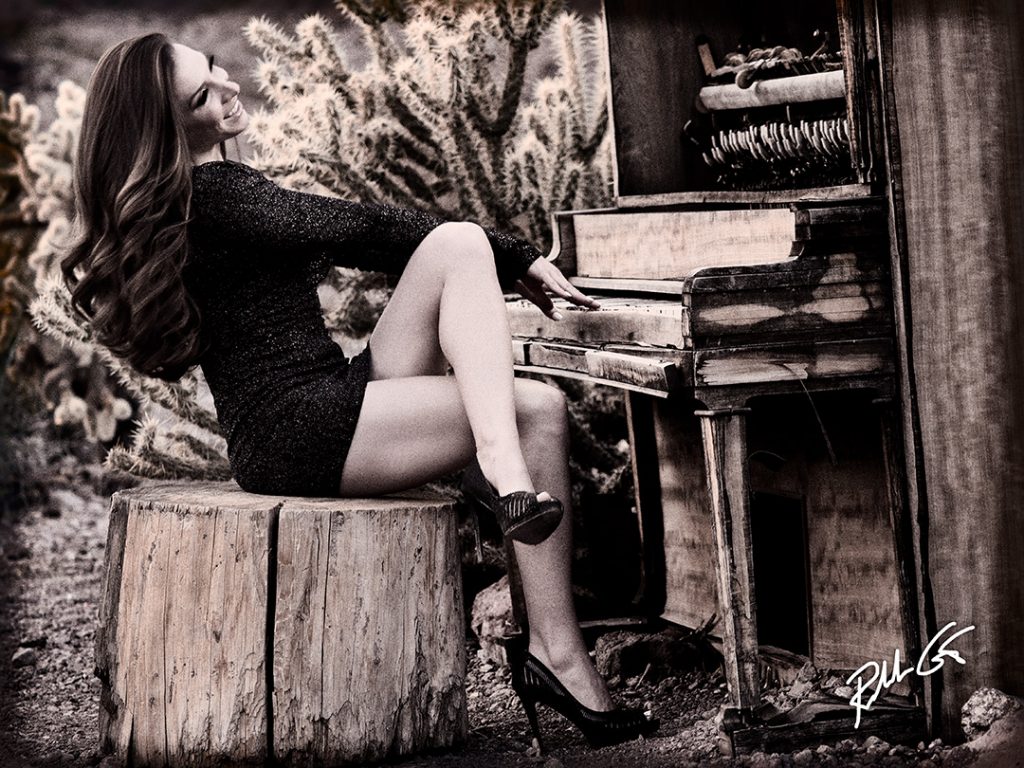 Photographs are captured in an instance, but photographic experience comes with time.

What’s the answer to the “what do I charge” question? Ironically, it’s hard to answer, but often I’ll tell a photographer they have to put a value on their worth based on their experience, education, and what they’ve invested in building their brand.  A photographer needs to build on the latter so at some point they can ask a potential client, “Do you want to pay for me, or economics?” I further explain to the photographer, especially if they still seem bedazzled by my answer, about my own personal experiences.

The first example I give them is a story when I was much younger and had just moved to Dallas as a single young guy still in my nurturing stages of photography. I was on a date with a beautiful blonde girl and she insisted we go watch the movie “Das Boot” which had just hit the theaters in 1981. It was a German, but English subtitled movie, about a German U-boat.

Fresh out of high school, I thought I rocked as a young photographer with my new Camaro Z28. Besides, my roommate was one of the managers of the hottest nightclubs in Dallas on Greenville Avenue and Lovers Lane, Confetties, where the line began early in the day to get in — I had a no-line pass. Well later that night I would learn that my no-line pass and the Z-28 wouldn’t matter, in fact, I would learn that perceptions mean everything. 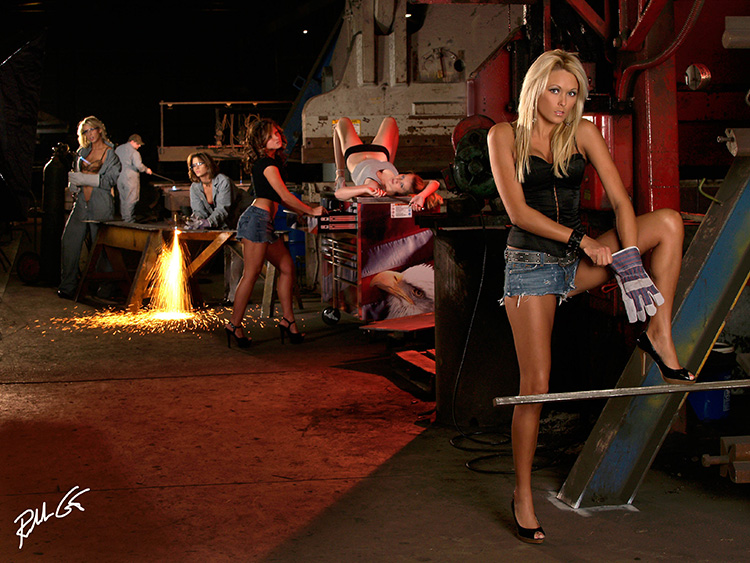 Large photo shoots take planning and experience and that has a value to your client.

After the movie, my date and I headed to a nice dinner. I was not only hungry, but mentally exhausted as at that time I spoke no German and reading English subtitles on the silver screen was like reading a book while distracted by an extremely large television. Then my date began to ask me what it was that I did for a living. Besides being a manager for a one-hour mini-lab in Mesquite, Texas, called Picture Perfect, I told her I was a freelance photographer new to Dallas. Her response, “Funny, I’m the person at (a blue-chip company I will not name in this article) that hires photographers to take our marketing photos, prospectus photos, etc., so you’re in luck, I’m the one that can put money in your pocket for your skills.”

I propped myself straighter in the chair, my eyes now wide open as I begin to smile and then she asked the million-dollar question, “How much do you charge?” I thought for about two seconds, remembered how I had charged the South Texas Oil and Gas Expo in Victoria, Texas $60 an hour to photograph the famous oil well firefighter Red Adair, plus how Dallas was slightly more expensive and responded with, “$80 an hour.” 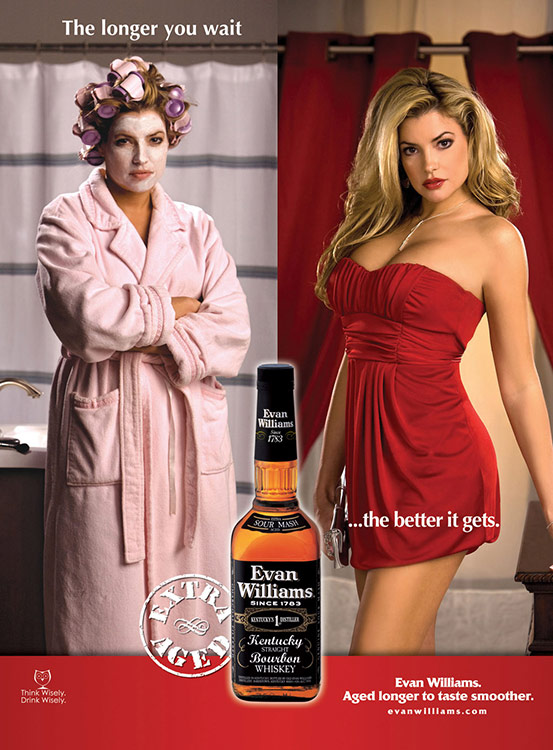 This Evan Williams liquor ad ran in several magazines for a year.

She immediately dropped her knife and fork on the plate and responded with, “Your work must suck! We don’t pay less than $150 per hour for our photographers.” I was dumbfounded, speechless, didn’t know how to respond, needless to say, dinner finished promptly and then she asked me to take her home — the date was over. She also never returned my phone calls and avoided me like the plague when I’d run into her at Confetties. I was a loser in her eyes, but actually, I was a winner in my eyes, and learned she was about my income, not my heart.

As you can tell from my own personal experience, without even looking at one single photo in my portfolio, I was perceived as a horrible photographer simply by what my hourly charge as a freelance photographer was communicated to a potential client. I learned from that experience, do your research. Analyze the market, find out what your competitors charge and more important, never underestimate your potential. I’ve often wondered what if I had responded to her with $200 per hour? Dunno.

Now back to the “me or economics” statement. Right just before the economic downturn, I had another Fortune 250 company approach me. The company had a new CEO and some of their products were microchips found in high-end audio systems, from extremely expensive cars to super expensive hi-fi home systems. I was actually in the Virgin Islands teaching a photography workshop, so I asked the attendees to help me work on the bid for the calendar they wanted.  We submitted bids ranging from $120,000 to $240,000 based on their specifications that involved 15 location shoots with models.

This calendar, which the company wanted to emulate the highly collectable Pirelli tire calendar, had requirements including four photos showcasing various cars’ audio systems along with the car manufacturers’ logos and a sexy model. The calendar was very specific for each shot that would require at least 12 to 15 days of shooting, models, assistants and a make-up artist, plus logistics.

After submitting the bid, the CEO asked why they should hire me over a less expensive photographer that might be able to provide that “good enough” photo. So, I responded with two things, and the first one caught their eye. I simply stated, “Did you ask the car manufacturers if you can use their logos in your calendar? These are trademarked logos and if you don’t ask, you just might wind up with a ‘cease and desist’ letter from their attorney while your calendar is on the printing press.” Of course, their answer was “no,” and my answer was “I just saved you tons in litigation fees, not to mention, stopping a printing press in middle of production is very expensive.”

They asked for one more example, which I gave them. They also asked for a third example, for which I simply stated, “Hire me and you’ll get at least half a dozen examples, but that’s as far as I go for now without a contract, you can’t give all the secrets away and that’s what you’re going to hire me for besides my photography.”

The moral of that story, you have to prove your value to your client when quoting a price above your colleagues. Show your client you are worth more than “just a photographer.” Think about what you can bring to the table that no one else can probably bring. I did this with the Evan Williams liquor ad campaign, which ran full-page in Playboy, Maxim and Sports Illustrated. I included the same advertisement, which I photographed of course, full-page in one of my photography “how-to” books. As I told the clients, magazines get thrown away in the trash each month, books stay on shelves longer — besides, I didn’t charge them for the advertisement in my book.

The next time you’re asked the million-dollar question, before you answer, do your research, find out what your competitors charge, offer “X” in your quote and make sure you deliver “10 times X” in the results. Prove your worth, besides your photographic skills. The only magic answer to the million-dollar question is, “Do you want to pay for me or economics?” then explain to the client what you’ll give them in value, besides photography, plus how that value didn’t come overnight, it comes from years of experience they’ll receive bottled up in one shoot. You can settle for “going rates,” or you can quote the going rate plus a percentage higher for the value they’ll receive from you, besides photography.

Rolando Gomez is a professional photographer and author of five photography books that has traveled to 45 countries for assignments. The former soldier and U.S. Army combat photographer has taught hundreds of photography workshops for almost two decades. A 2016, 2017 and 2018 Top Writer for Quora, his partial credits include Newsweek, Parade, Playboy, Rangefinder, Maxim, Rangefinder, New York Times, Stars & Stripes, and various other publications.
(Visited 614 times, 1 visits today)