Maui Photography Assignment And the Mistakes Made

Throughout my career, I’ve made about a dozen trips to Hawaii, my first landed me in Honolulu as a photojournalist on assignment to cover the military’s Joint Task Force Full Accounting mission. On that assignment, weeks before the 20th anniversary of the fall of Saigon, I covered how the task force does all it can to find and identify missing service members throughout the world, including Vietnam. 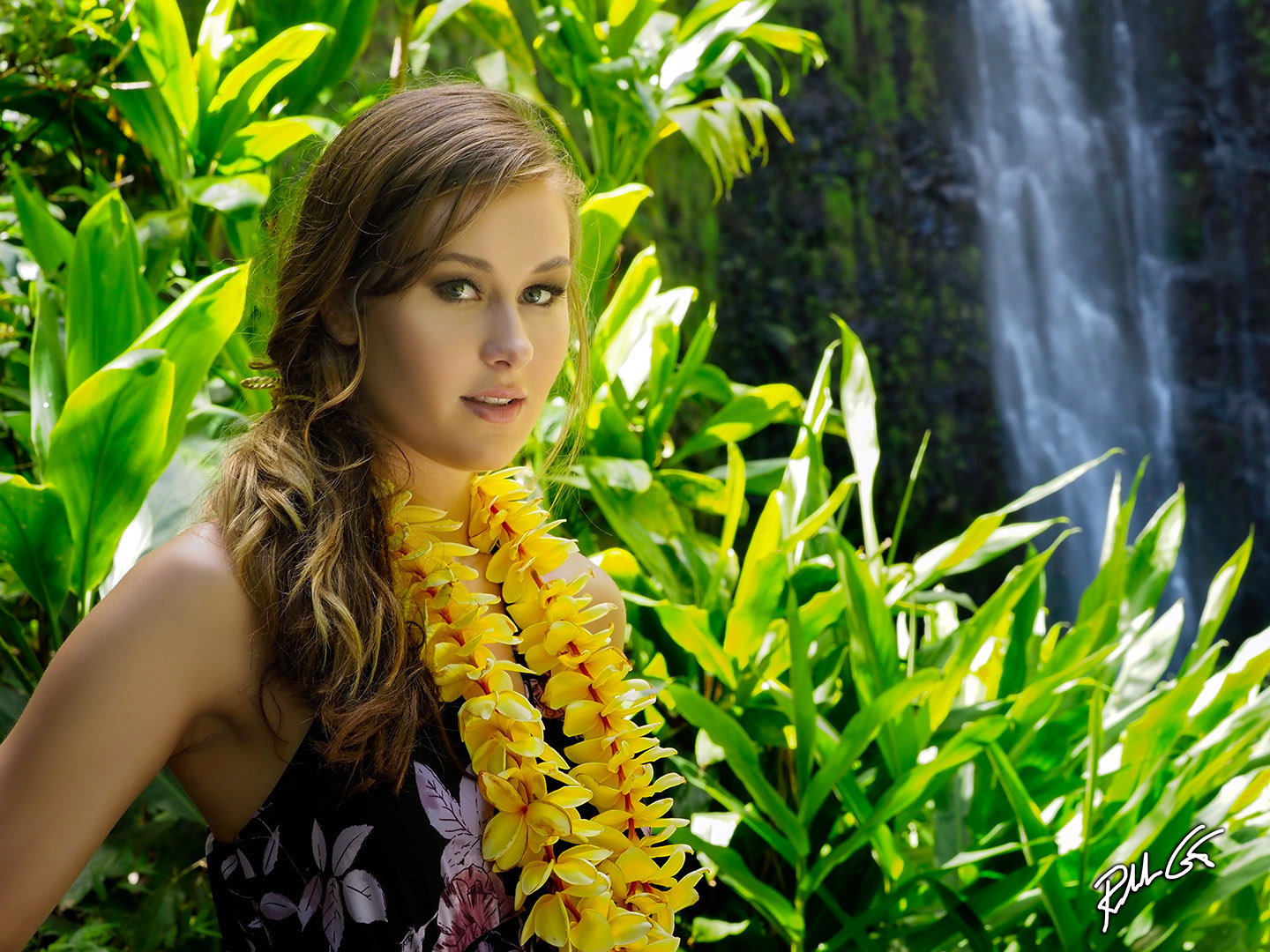 Rebecca is illuminated with a SUNBOUNCE MINI fitted with a SPARKLING SUN fabric at the Waimoku Falls waterfall.

A media team composed of one broadcaster, one videographer, and one journalist, plus myself, arrived on a Friday in early April 2005 and we’d begin our work for the next two weeks that following Monday—this gave us the weekend off. I had friends in Maui, so when they learned I’d have that weekend free, they arranged for me to fly the short hop from Honolulu to Maui and back. It was then, 22 years ago, that I’d fall in love with the island of Maui and what it has to offer, though I never thought then that I’d be back for over a decade now to photograph beautiful models.

These return trips to Maui started with my second trip in Jan. 2006 to scout locations in Hana, Lahaina, Kaanapali, Wailea, Kapalua, and Kihei areas to photograph beautiful models for future photography workshops. In Hana I’d eventually find a perfect secluded location, a private 18-acre farm normally used as a nudist retreat. It ran on solar power with Gilligan Island styled huts and “open-space” toilets that literally faced the jungle; there were no privacy walls. Seriously, just you, the colorful foliage, the birds and the mosquitoes when you did your business. 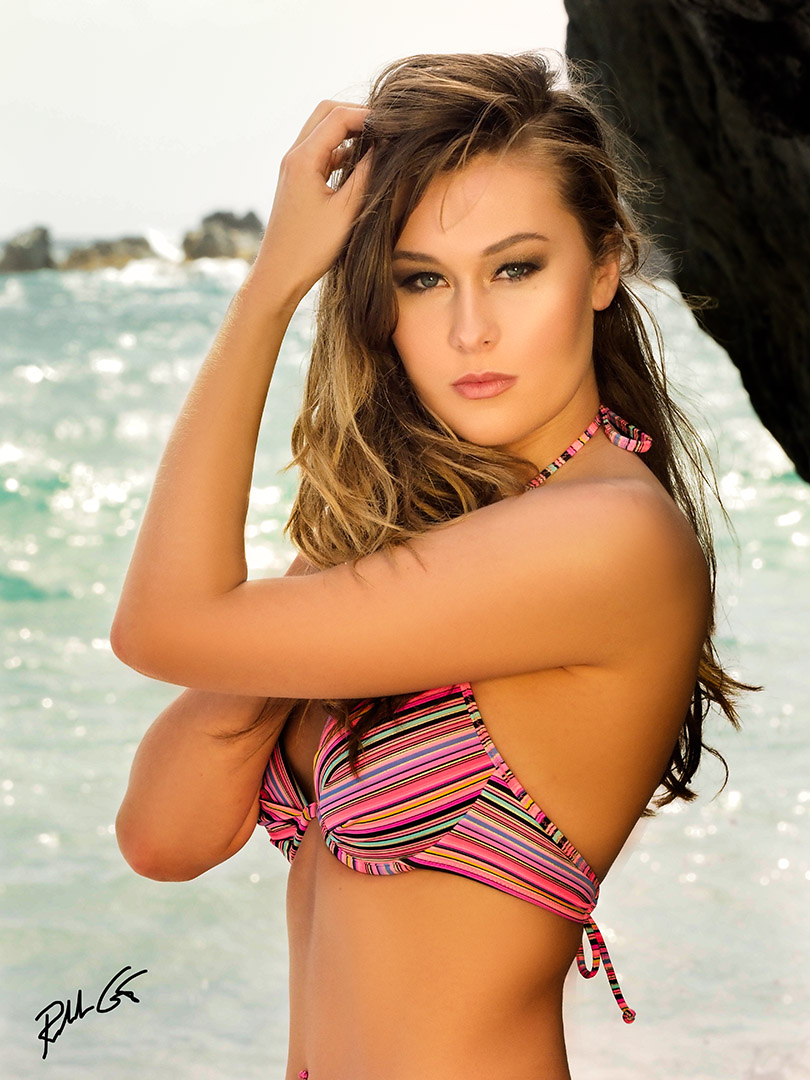 Rebecca stands in open shade at Black Sand beach in Maui. She is illuminated with a SUNBOUNCE MINI fitted with a SPARKLING SUN fabric screen.

This naturist retreat was directly across the Waiʻānapanapa State Park in Hana, a park known for the famous Black Sand Beach, amongst tide pools, lava tubes, seabird colonies, blowholes, freshwater caves, and a natural stone arch. It was a perfect location in Hana and I was excited that I could hold many future photography workshops based out of this location—that excitement ended upon arrival on the first day of that first photography workshop in Maui, 2006.

That day, I would eventually drive the 54-mile road to Hana three times going, and two times back as I shuttled people from the airport at Kahului to Hana, yes, that included the 620 curves you have to steer each way, times five. By the end of the day I felt like I had no shoulders left. Sore shoulders were an understatement. But nothing was worse than my arrival on that first leg when the owner of the property told me that after my photography workshop ended the new owner would take over the property—she had sold the property to the most famous glamour photographer on the planet, David LaChapelle.

The talented and world-renowned fine art, fashion, and commercial photographer David LaChapelle had the property under contract and he would complete the purchase for $1.5 million after my departure. David would then upgrade the property the next two years to his tastes and has since hosted many guests there including Lady Gaga. 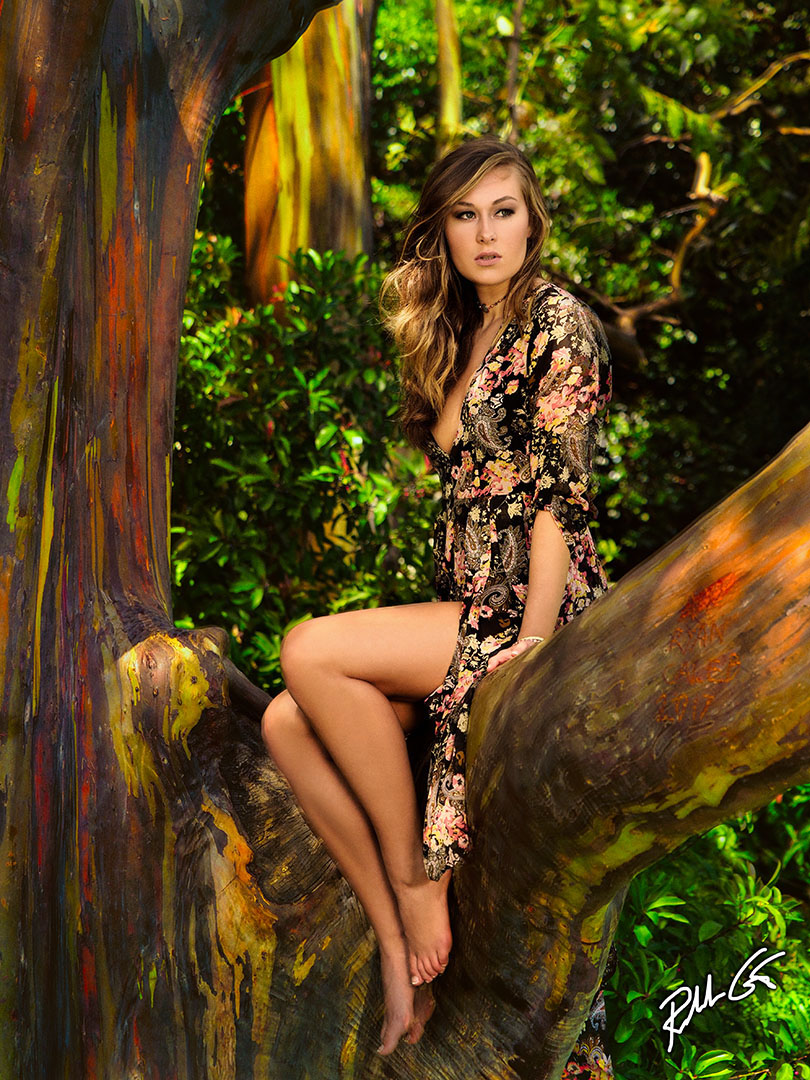 Todd stopped at the “Painted Forest” on the road to Hana where we took some photos of Rebecca with the eucalyptus trees.

While I can only imagine what LaChapelle’s property looks like now, the road to Hana hasn’t changed much and so when I was approached for a photography assignment in Maui this past April, I decided we’d make the trek again to Hana, stopping along the way to photograph its beauty.

I also had become friends at that first workshop with local photographer Todd Mizomi, so I coordinated with Todd to assist me on this assignment, as Todd is a talented photographer and videographer. It also helped that Todd is very familiar with the island and has a photographer’s permit required at all the public locations where we’d do our photography on this assignment. Todd’s help was invaluable.

Our first stop was the eucalyptus trees, also known as the “Painted Forest,” at the beginning of this windy road-trip on the first day and after that photo shoot, we decided we’d save the rest of the road to Hana excursion for the next day. It takes over two hours to get to Black Sand Beach and since we knew that once we’d finish at the beach we’d continue our travels beyond Hana to the Waimoku Falls at Haleakala National Park at the Pipiwai trail in an area called Kipahulu, that it was best to make that portion of the road to Hana excursion as a dedicated one-day trip for the next day.

Waimoku Falls, about a half hour past Hana, is at the head of the Pipiwai trail and it’s a slightly inclined two-mile hike to get to the largest waterfall on the trail that is approximately 400-feet in height. Obviously you have to walk back the two miles once you’re done, but it’s worth the walk through the bamboo forest and to even see one of Maui’s largest Banyan trees along the way with other smaller waterfalls and bridges you have to cross. In the end it’s exhausting, so I’m glad we didn’t try to tackle the forest, the beach and the waterfall all in one day.

Since we split the days on the road to Hana, that first day after the painted forest we had time after a late lunch at Mama’s Fish House and then decided we’d go to Makena Cove, just south of Big Beach, for a sunset shoot. Upon arrival about two hours before sunset, many local photographers call this area the “Secret Beach.” The locals are more aware of Makena Cove than tourists as it’s a very popular location for weddings and sure enough a wedding party was arriving at the same time we arrived. 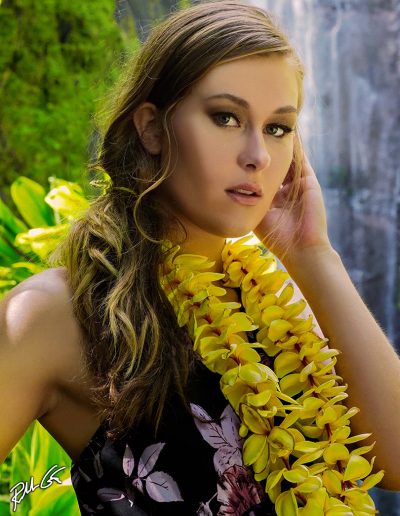 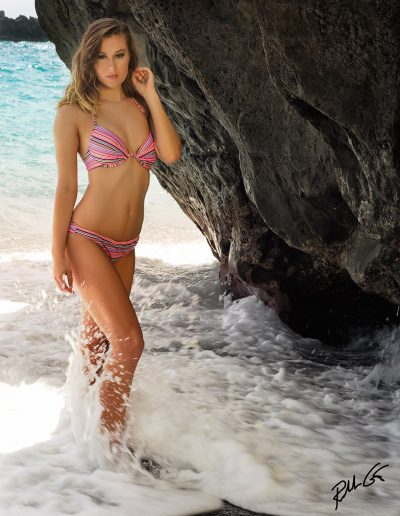 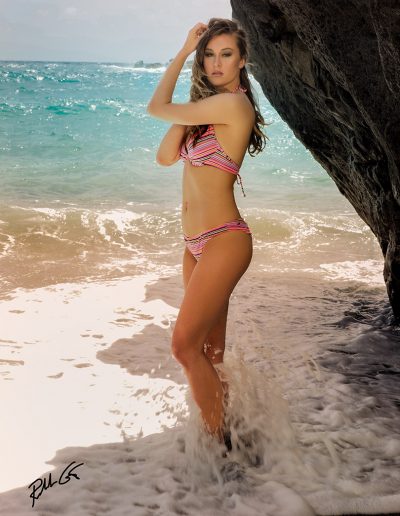 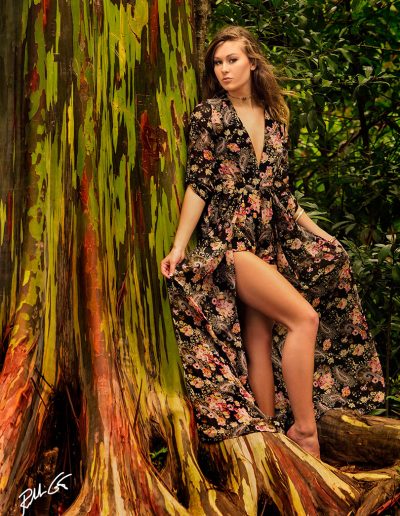 Todd knew the wedding photographer and videographer and so we all agreed on professional etiquette and stayed out of each other’s line of view as we’d shoot through to the sunset to eventually end our first shooting day there in Maui. It also helped to have photographer Ceasar Lizada on hand to help us out at that shoot and a few of the other locations when he could—great assistants are hard to find, but the best ones are those that are great photographers too.

Ironically, 42 years after the fall of Saigon, even though I’d been to Maui many times since then, it was 22 years ago that I set foot on this beautiful island—except this time I was on an assignment that involved a beautiful model and not as a guest during the beginning of a military photojournalistic assignment that documented the Joint Task Force Full Accounting mission. 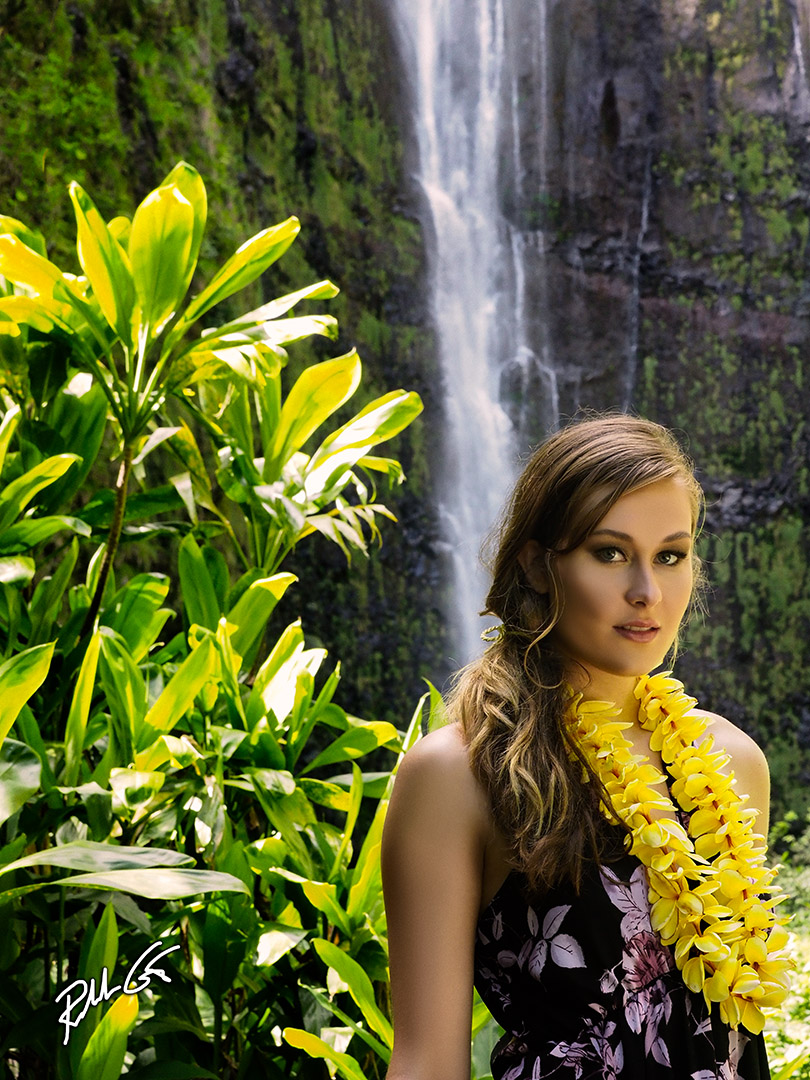 Often when you travel on assignment, things happen, like when you forget to pack something, either at your starting origin or you leave something at your hotel room and you’re too far to travel to retrieve it. Sometimes you just do things without thinking because you’re trying to beat the setting sun, or you’re battling nature’s elements like wind, surf and sand.

For example, on this part of the trip, we could have used the middle bar that connects the cross bars of the SUNBOUNCE photography reflectors. This is important as this middle bar is designed for the SUNBOUNCE Enterprise clamp used to clamp the reflector onto a C-stand or boom pole. We failed to bring it, so we very carefully clamped onto the cross bar frames, something you should not do—the middle bar is made specifically for this situation.

While at Makena Cove, I started shooting too early before the golden hour. This caused me to “fight the light” and become frustrated, but eventually I snapped and realized this is something I preach not to do, so I stopped shooting and waited for the right light. This situation, which I only blame myself for, caused me to mount the SUNBOUNCE Mini photography reflector where the “knuckle” for the C-stand attachment was pushing into the SPARKLING SUN fabric screen.

The screen is very durable, but this is something that can tear or stretch the screen—you won’t see me do that again as this screen is extremely important to me, especially after I discovered on this trip how great a light modifier it is in the type of photos I capture.

Finally, it wasn’t until after Todd put the video together that I realized the SUNBOUNCE flash attachment bracket was affixed to the frame when it should be affixed to the beginning of the cross-bar frame, just before the bend—the strongest part of the cross bar.

In the end Todd and I captured some beautiful photos of the model Rebecca, but perhaps it was the excitement of the first day back in Maui after an almost two-year absence, but I know that I could’ve done better, and I will on my next trip. There really are no excuses for my sloppiness though the trick when you make mistakes is to correct what you can and salvage what you can with what you have, and Todd, Ceasar, Rebecca and I did just that and now I can’t wait to go back to Maui again.

Rolando Gomez is a professional photographer and author of five photography books that has traveled to 45 countries for assignments. The former soldier and U.S. Army combat photographer has taught hundreds of photography workshops for almost two decades. A 2016, 2017 and 2018 Top Writer for Quora, his partial credits include Newsweek, Parade, Playboy, Rangefinder, Maxim, Rangefinder, New York Times, Stars & Stripes, and various other publications.
(Visited 807 times, 1 visits today)